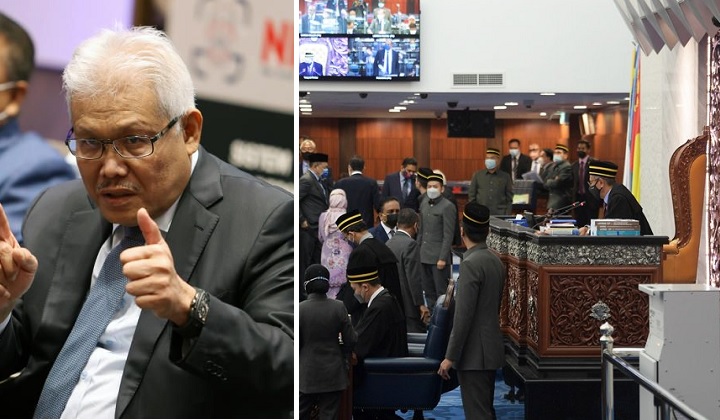 Home Minister Datuk Seri Hamzah Zainuddin expressed his disappointment towards pro-government parliamentarians who were not present in Dewan Rakyat for the bloc vote to extend the enforcement of the sub-section 4(5) of the Security Offences (Special Measures) Act 2012 (Sosma).

Hamzah claims that several MPs even exited the Dewan Rakyat just before the voting session, which saw the government motion was rejected as 86 MPs voted against the extension while only 84 MPs voted in favour.

50 MPs were not present for the voting.

“I was not very happy because some of them were already in the Dewan Rakyat, I can name those who just walked out during the bloc vote. That’s not fair,” the Larut MP was quoted as saying by The Vibes.

When asked why the pro-government MPs left Dewan Rakyat before the bloc vote took place, Hamzah sarcastically said “Because they do not like my face.”

Last Wednesday, Hamzah tabled a motion in Dewan Rakyat to seek an extension to the enforcement of subsection 4(5) of Sosma for another five years after July 31 this year.

Read More: “Malaysia Will Be Dominated By Criminals And Terrorists If We Don’t Enforce Sosma” Says Home Minister On 28-Day Detention Period

Subsection 4(5) of Sosma, which allows for a 28-day maximum detention period without trial, must be reviewed and agreed upon by both Dewan Rakyat and Dewan Negara every five years.

“The question is of regaining the agreement from Parliament and continuing to push for its renewal in July.

“I will utilise all avenues available, and God willing, make sure that Sosma will continue to be enforced after July,” he said.