DAP had been using the front-page headline as its propaganda tool, says Najib. 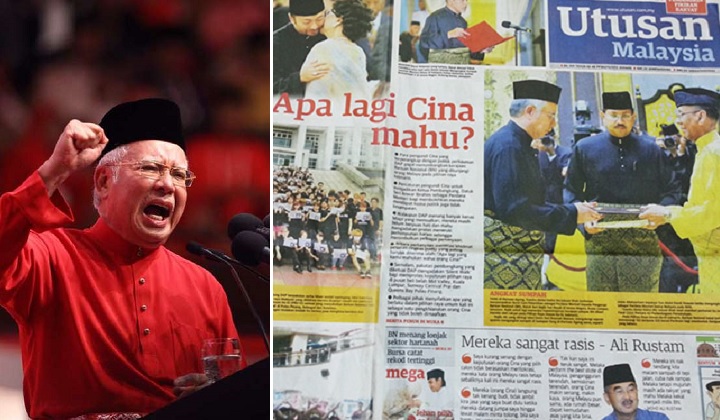 According to Najib, DAP had been using the front-page headline as its propaganda tool due to the fact that his face was used as a graphic to accompany the report.

“I repeat that I have never and will never say those words, which I deem are very insensitive and arrogant. That is simply not me,” he was quoted as saying by The Vibes.

The report, published in the aftermath of the 2013 General Election, caused a stir among the public and was investigated by the police under Section 4(1)(c) of the Sedition Act 1948.

Najib addresses the matter during his key-note address in the 2nd Penang International Business and International Summit at Spice Arena earlier today.

In the same speech, Najib, who is making his first appearance in Penang since the 2018 general election, chided Pakatan Harapan (PH) for failing to fulfill their election manifesto, including the infamous pledge to abolish toll at the first Penang Bridge.

He also appeared to take a swipe at former state chief minister and former finance minister Lim Guan Eng, for failing to give RM1,000 a year to Tunku Abdul Rahman University College (Taruc) students after winning the 2018 general election as promised.

“Well, not only did students not get the RM1,000, but he delivered a mighty big slap to Chinese education when DAP cut the funding to RM5 million from the RM30 million the Barisan Nasional government gave Taruc when I was prime minister,” Najib said.

The Pekan MP also pledged the revival of the economy if Barisan Nasional (BN) wins the next general election with a solid majority.

“Many Chinese people have told me that they see with their own eyes and have experienced how the economy had dried up after GE14.