He kept refusing her help and was ready to walk to the nearest petrol station on his own. 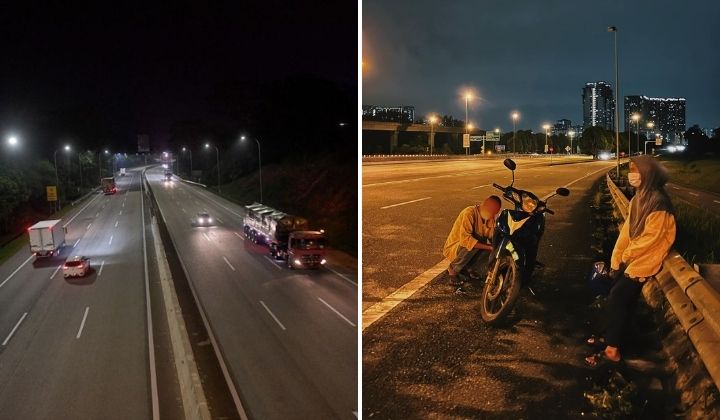 A car breaking down in the middle of the highway can be stressful for anyone, more so when it happens at night.

A Facebook user Alessandra Ng was on the road late at night when she came across a man and a woman struggling to start their motorcycle along the highway around 11pm.

She decided to make a U-turn to check on them and see if she could help them. After talking to them, she found out that they were both father and daughter, and they needed engine oil for the motorcycle.

She offered to drive them to a nearby petrol station to get what they needed. However, he refused and insisted that he’ll walk there himself.

Alessandra refused to let him walk on his own and told him that he might not need her help, but his daughter needed it.

The man still declined her offer and said he didn’t have any money. He told her to go on her way.

When he kept refusing, Alessandra asked whether anyone stopped by to offer them assistance.

Yes yes, but I don’t have no money on me. I told them it’s ok, I go the extra mile. The engine is hot so I might as well keep driving.

That was when she realized why he kept refusing her help. This time, she offered to lend them some cash to fix the motorcycle.

The request caught him by surprise. With tears spilling, he thanked her and finally agreed to get into her car to find the nearest petrol station.

During the drive, she asked them why they were on the road so late at night. It turned out that they had to head to Melaka at the last minute because a family member had passed.

At that moment, Alessandra understood why he refused her help. Perhaps he was too ashamed to accept money from strangers and wanted to set an example for his daughter by remaining strong during tough times.

Their encounter ended on a bright note because they finally found a petrol station after searching for some time. They got the engine oil, filled up the motorcycle and was soon on the road again.

At the end of her post, Alessandra reminded everyone to be kind and offer help to those in need.