Frank Steward Panting Sa’s efforts paid off when he got accepted to study in UPSI. 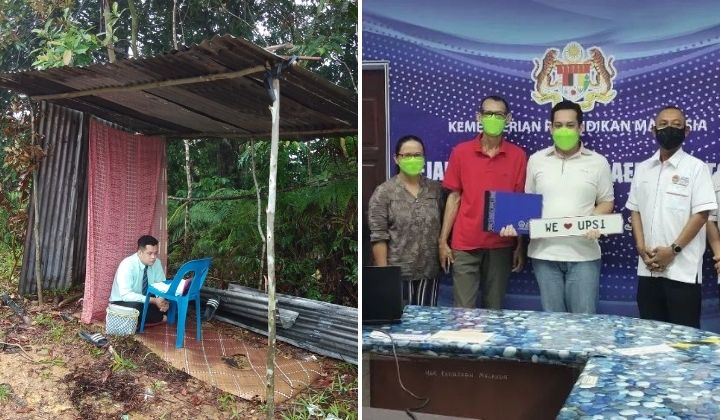 All of his troubles paid off because he succeeded in getting into Universiti Pendidikan Sultan Idris (UPSI).

According to Malay Mail, Frank’s dream of becoming a teacher did not escape the attention of UPSI vice-chancellor Prof Datuk Dr Md Amin Md Taff.

Md Amin congratulated Frank in a Facebook post and commended his willingness to trek up Bukit Kelingkang for better internet speeds.

He added that he was inundated with WhatsApp messages from friends and acquaintances when Frank’s actions went viral on 16 February.

UPSI is always looking out for students with such a spirit of perseverance to carry forth the banner of Suluh Budiman. May young Frank bring joy and pride to his beloved family. Indeed, UPSI has developed from the spirit of its students who never give up. Well done young man.

Frank shared a photo of him receiving the offer letter to study at UPSI on his Facebook page too.

It was handed over by UPSI deputy vice-chancellor (student affairs and alumni) Assoc Prof Dr Norkhalid Salimin at the Betong District Education Office.

It all started with an important trek uphill

Frank’s brother, Mario Sa, documented his brother’s trek up Bukit Kelingkang for better internet speeds and posted up the video on Facebook on 14 February.

They had to make the trek because the WiFi in their longhouse – Rumah Suing in Teberu, Ulu Kemalih – couldn’t support video calls.

The former student of SMK St Augustine, Betong, kept going although his pants got wet and he was bitten by leeches.

His father, Sa Ujom, helped to build a makeshift hut where Frank could attend the interview. Frank sat on a bemban mat and a Pua Kumbu cloth served as his backdrop.

According to Twitter user @kalossharon, the Iban people only bring out the Pua Kumbu cloth for special occasions like weddings or big ceremonial festivals.

In Frank’s case, the fact that his family brought out the cloth for his interview showed that they had big hopes for him.

Many people might not realise this, but his parents have big hope for this kid sampai gantung Kain Kebat behind him for university interview.

What the hell is wrong with me.