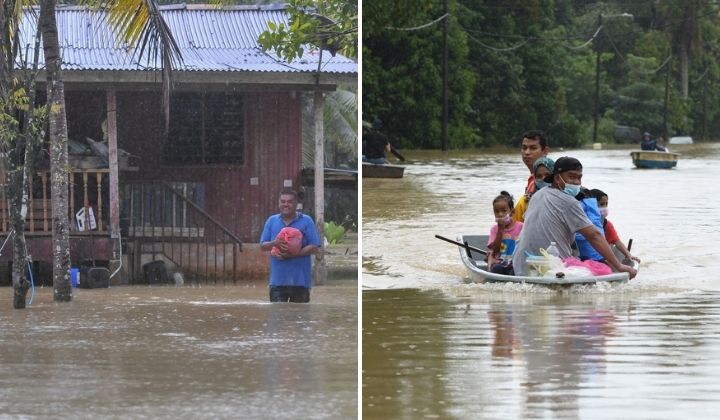 Relentless rainfall across Terengganu has caused widespread flooding in several places in the state.

The floodwaters have forced thousands of people and families to evacuate their homes. According to Malay Mail, about 4,463 people from 1,315 families were evacuated today (27 February).

Rescuers expect more victims to be moved to safety since the rain wasn’t letting up.

One of the locals in Hulu Terengganu tweeted that waters were rising, and some homes had been flooded until the waters reached the roofs.

Residents were forced to climb onto the roof while waiting for help to come. Some people in the neighbourhood were trapped while the water levels continued to rise.

Rescue efforts were delayed due to strong water currents, making it hard to rescue people from their flooded homes.

New Straits Times reported that helicopters were used to evacuate flood victims, including the elderly and infants in Kampung Lubok Pait, when floodwaters cut off the road access.

A TikTok video showed huge waves hitting Redang Island too. Visitors were advised to postpone their beach holiday until the weather calmed down.

The list of flood relief centres in Terengganu can be found online here.

Hopefully, the flood victims waiting for help will be rescued as soon as possible.

Aside from Terengganu, New Straits Times reported that Kelantan is experiencing a bigger flood compared to last year.

Kelantan Fire and Rescue Department director Zainal Madasin said Rantau Panjang was the wort hit district. He had to freeze the annual leaves of more than a thousand of its personnel.

According to the State Welfare Department’s flood portal, five districts have been affected by the flood: Kuala Krai, Jeli, Tanah Merah, Pasir Mas and Pasir Puteh.

According to New Straits Times, the Health Ministry was also directed to assist with Covid-19 prevention measures to curb the spread of the virus at the relief centres.