Bryan Wee and Deacon Chai are known for crossdressing during their live streams but chose the wrong location to do it this time round. 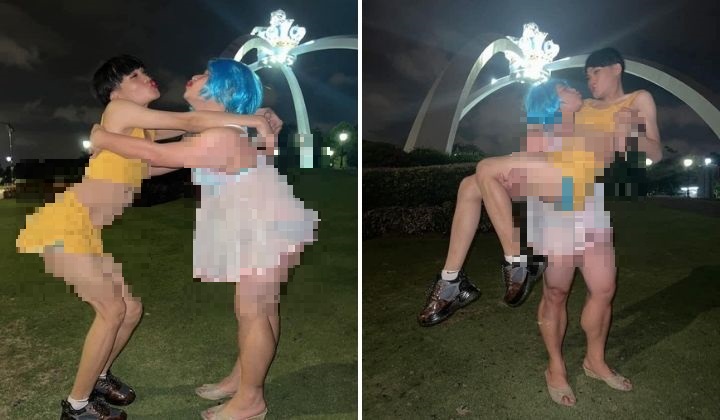 Local influencers Bryan Wee and Deacon Chai have caused an uproar after posting lewd pictures of themselves in women’s clothing in front of the Bukit Serene Palace in Johor Bahru.

They also pretended to kiss each other while showing off their bottoms (and underwear) for all to see online.

According to Sin Chew, there was even a 10-second video where they screamed, “We’ve reached Johor!” and moaned “I love you” to each other.

Both of them are known to cross-dress during their live streams but this time they really chose the wrong spot to do it and it angered some netizens.

According to Sin Chew, netizens wasted no time and tagged the Facebook pages of the Sultan of Johor, the Johor Crown Prince Fan Club and the police, and demanded action to be taken against the two men.

They find that it was also disrespectful to the Johor royal family due to the location the pictures and video were taken.

The offensive post has been removed but netizens could still find screenshots of the posts online.

Netizens added that both of their actions were a disgrace to the Chinese community and they have to cleanse their eyes after seeing this atrocity.

Due to the public outcry, Johor Bahru South district police chief Raub Selamat told Oriental Daily that the police has received a report over the post and had launched an investigation.

Majority Of Terminal Diseases Patients Are From The B40 Group, Says Health Minister