The robbers sandwiched the victim at the petrol station with two cars, blocking the front and rear. 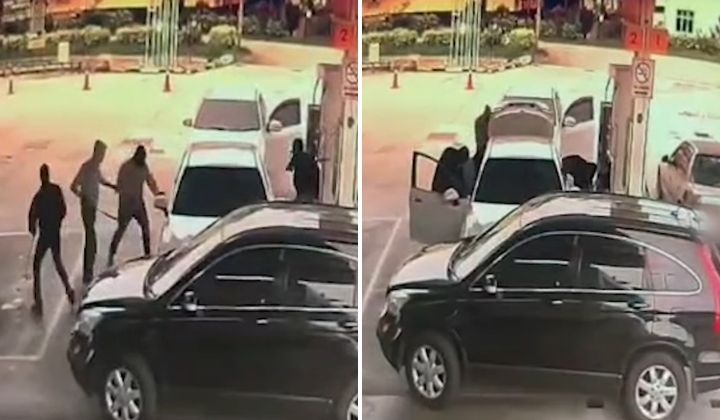 He drove to the petrol station in a white Toyota Camry before he was sandwiched between two vehicles. A Honda CRV blocked the front while a Perodua Myvi blocked the rear end.

In the CCTV footage, the victim could be seen trying to get away by reversing and hitting a robber with his hand.

However, he was blocked by the Honda CRV that drove closer and the five robbers wielding parang.

The robbers immediately started hitting the car and pulling open the doors. They managed to take three bags that were filled with jewellery, a smartphone, cash and private documents of the victim before escaping.

According to Kosmo, the victim managed to give chase and push the black Honda CRV until it lost control and flipped over at a roadside near a row of shops in Lukut.

The robbers ran away but the victim managed to recover two bags of jewellery from the Honda CRV.

After running the number plate of the Honda CRV, the police found that it was a vehicle that was stolen on November 2021 in Sri Hartamas, Kuala Lumpur.