Apparently, this McD store lists all their OKU employees as a string of numbers instead of their names. 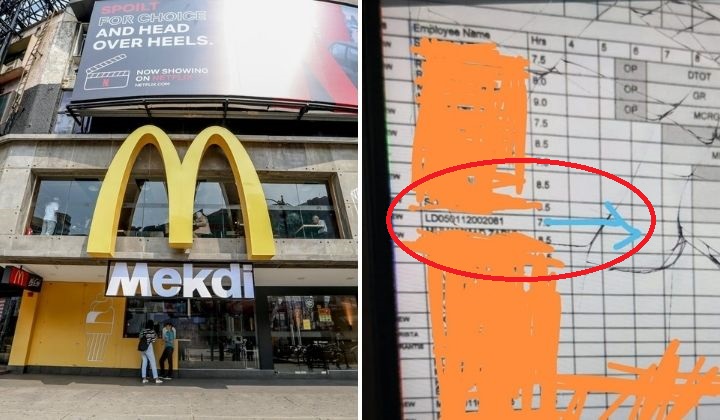 [Update: McDonald’s Malaysia has investigated the issue. The store manager will face appropriate action and maintains that the OKU employee is a valued team member who has been with them for 4 years.]

Despite continuous awareness campaigns about people with disabilities (OKU), there are still people in Malaysia who do not see them as human beings.

A Facebook user Muhammad Hanis recently shared how his dyslexic brother was treated in McDonald’s.

His brother Aniq (30) who works in McDonald’s Forest Heights in Senawang was supposed to clock in for work on Sunday, 13 February at 9am.

However, Aniq did not come in for work because his name wasn’t listed on the schedule.

At around 10am that day, one of the premise managers asked in the work Whatsapp group why he didn’t come in for work.

Aniq’s father answered on his behalf and explained that his name wasn’t written on the schedule.

The manager in question said Aniq’s name was listed on the schedule as his OKU card number. Aniq’s father replied that his son’s name is Aniq Ashraf and he’s not a series of numbers.

Shockingly, the manager responded rudely and said if Aniq was really a human and not a series of numbers, he would have been able to clean the lobby properly.

The manager added that a human will listen to instructions and said Aniq was dumb.

Hanis tried to protect his brother

Hanis felt hurt and angry when he read the reply. He called up the manager several times but the call was ignored.

Hanis added on Facebook that the work schedule was sent at 1am and Aniq was expected to be at work at 9am the next day.

When he called the store, he was told the manager was on leave. Hanis then made his disappointment and anger at the treatment of his brother clear in numerous texts.

He also tried to call McDonald’s again and this time he was put in touch with a store manager called Nor.

Hanis asked Nor to explain how they could have let something like this happen to their employees.

During the conversation, he found out that all OKU employees are identified by their OKU card numbers and found that discriminatory.

He also wondered why no one in the workplace stood up for his brother and let the abusive behaviours continue.

Do you think they have the right to call people with disabilities (OKU) like my brother as stupid?

Hanis pointed out that it was fortunate that they read his brother’s Whatsapp messages and wondered about the others who don’t have anyone to stand up for them.

The next day when Aniq returned to work, not a single person apologized to him. None of them took the initiative to console or talk to him.

Hanis does not blame McDonald’s and all of its staff but hopes that McDonald’s will carry out an investigation into this case so that no one else will face the treatment his brother received.

Netizens are shocked by the treatment

Netizens were taken aback by the rude behaviour shown by the manager and how OKU employees were treated.

Hello @McDMalaysia how on earth are you allowing this kind of manager to run the store? I would retaliate like that if my OKU family member treated that way. Bye, not going to be your customer until better treatment to OKU. Plus, you takda fries besar. https://t.co/FF0MudYeR6

They asked why OKU employers are not referred by their name but by numbers and whether this has been a practice all this time.

Some of them said it was outright ableism, discrimination in favour of able-bodied people.

They want proper action to be taken against the manager too.

can we stop normalizing ableism in work environment? disappointed, truly disappointed with this kind of people. https://t.co/uMv5k5bDhD

TRP has reached out to McDonald’s Malaysia for further comments.

Get Ready To EAT This 65th Merdeka Day – RM6.50 Is The Magic Number