The reckless behaviour of a passenger in the Toyota Vios caused a minor accident. 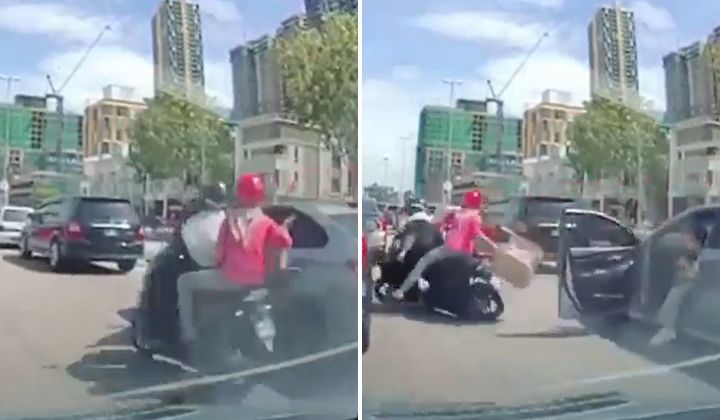 Ever since we’re children, we’re always taught to look at both sides of the road before exiting the car.

However, someone seemed to have missed the memo when they opened the car door on a busy road and caused a minor accident.

A video recently went viral showing a passenger in a Toyota Vios suddenly opening the car door wide and partially stepping out of the car.

A motorcyclist and a female pillion rider knocked into the car door and fell onto another car across the Vios.

The car passenger managed to get back into the car without getting injured. Both women on the motorcycle seem to be uninjured too.

The pillion rider could then be seen approaching the car and confronting the passenger in the car.

Netizens were aghast by the car passenger’s behaviour and wondered why the passenger didn’t check or think it through.

They also pondered over the reasons for exiting the car on a busy road with the majority thinking it was to walk away from a fight.

Another netizen said it’s best to throw away the car’s side mirror since it wasn’t used and caused trouble for others.

Netizens also suggested the motorcyclist lodge a police report because reckless behaviour like this can cause worse accidents.

They added that the video hopefully proved that the motorcyclist wasn’t in the wrong.