The sudden heavy rain and strong winds caught many by surprise in Penang in the evening yesterday. 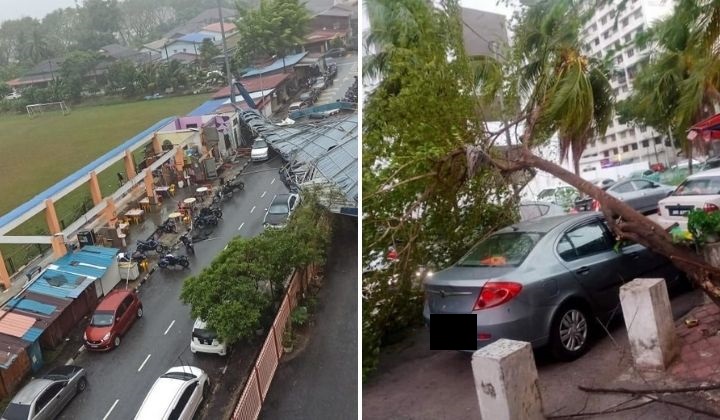 A freak storm caught a lot of people by surprise and caused damage in several areas in Penang on Tuesday evening, 8 February.

Social media was abuzz with videos and pictures of the damage such as uprooted trees and damaged vehicles from locals.

In a TikTok video shared by @aerulbp7, motorists at the Penang Bridge had to slow down their vehicles due to strong winds which started after 5pm.

The video showed the people who were fishing under the bridge facing the rough seas too.

Based on comments, those who fish under the bridge will usually tie themselves close to the pillar and hold on strongly.

One of the uprooted trees at Jalan Tengku fell on top of a car. Fortunately, no one was injured.

The uprooted trees blocked a path towards Bukit Bendera too, as reported by The Star.

The freak storm also damaged the roofs of a food court near the Sungai Ara mini stadium on Jalan Tun Dr Awang and a food stall in Taman Abidin, Jelutong.

Berita Harian reported that the sudden strong winds and heavy rains took everyone at the food court in Sungai Ara by surprise. The torn roof landed on some vehicles too.

No casualties and floods so far

Despite the heavy winds, there were no floods or casualties reported so far.

The Civil Defence Force (APM) together with the Penang Island City Council (MBPP) are carrying out the cleanup process together in the affected areas.

Previously, the Malaysian Meteorological Department issued a secondary warning on strong winds and rough seas around 5pm on Tuesday. Thunderstorms, heavy rain and strong winds were to be expected over the waters of Perlis, Kedah and Penang.

The forecast predicted strong winds up to 50 km/h and rough seas with waves reaching 3.5m.

MetMalaysia’s long-term weather analysis determined that Malaysia is now in the midst of the North-East monsoon season which will continue into March 2022.