A monk at Kek Lok Si Temple requested the people in the car to leave but was rudely spoken to instead. 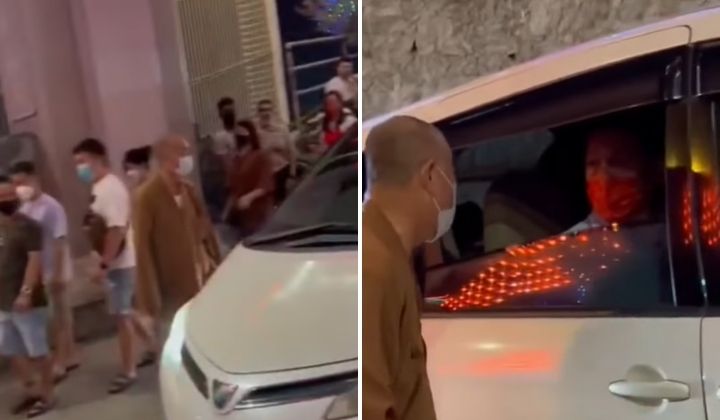 There are all kinds of people in the world and sometimes you’ll meet someone who isn’t aware they are a rude person.

A clip showing an argument between a monk and a devotee at Kek Lok Si Temple recently went viral with 1.2k likes and 109k views.

The caption of the video reads, “Have you seen any rude and la*** monk before?? Visit Kek Lok Si Penang.”

In the video, the monk could be seen holding up his phone to record the devotee sitting in a big parked car that was blocking the entrance to the temple.

Other devotees could be seen walking past the white car in a single lane because the vehicle was blocking most of the space.

The frustrated monk told the devotee to move the car away. Instead of complying, the man in the car retorted, “Did you forget to take your medicine or did you take the wrong one?”

Angered by the man’s response, the monk went into a tirade and said, “What are you talking about? You’re the one at fault. You’ve blocked the road and a lot of cars are queuing up behind you! You’re so unreasonable!”

The two men traded more angry words before the car finally drove off.

Netizens were confused as to why the monk was painted as the faulty party in the incident.

They pointed out that the driver and the man in the car were selfish for blocking the road and were too stubborn to leave.

Some empathised with the monk and said the monk must have been very patient before the outburst.

Just like everyone else, a monk has feelings too and netizens said the monk did not use any bad words.

Netizens agreed that the man in the car was stubborn and praised the monk for dealing with the situation the best he could.

Who do you think is at fault here?