The clue lies in the bottle’s thin and narrow green cap. 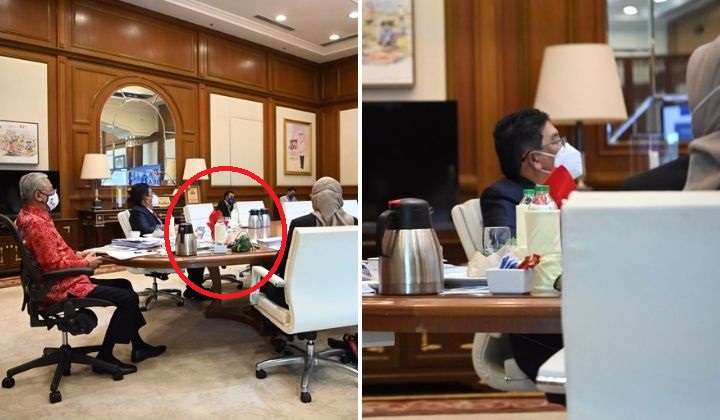 The ministers at the National Action Council on Cost of Living (NACCOL) were criticised for being tone-deaf and hypocrites after a video announcing special chicken prices was released on 31 January.

In the video, it was announced that the price of standard chickens will be dropped by 20 sen, from RM9.10 to RM8.90.

As soon as the video was posted, angry netizens zeroed in on the expensive bottles of water, Evian, served in the meeting room while the ministers decide the measly price cut.

Not long after the Evian water fiasco, Bernama posted on Twitter some new photos from a TVET-coordinating (technical and vocational education and training) body meeting involving the prime minister and several ministers.

This time, netizens were amused to see the ministers covering up the mineral water bottles with napkins.

Judging by the green caps, they’re not served Evian water but have decided to cover up the bottles anyway.

Netizens tried to guess which mineral water the ministers were served. Answers ranged from Spritzer to the French-produced Volvic water.

Judging by the width of the cap from the side, a netizen was confident that it was F&N’s Ice Mountain.

The conclusion was further cemented after comparisons with Volvic which has a dark green cap and Spritzer which has a thicker cap.

A few netizens said it’s too late to cover up and doing so only showed that they really have something to hide. Also, who gets the leftover Evian?

Ridiculous. Why would anyone want to wrap a bottle, unless you are hiding something?????

Aside from guessing the brand of mineral water being served, some netizens pointed out that the act of covering the mineral water bottles showed that the government knows what the rakyat is saying.

Despite knowing, they chose not to do anything to help the rakyat.

Another person said it’s amusing to see Malaysians scrutinizing the items on the meeting table instead of the content of the meeting.

In response, another netizen said it was because the meeting wasn’t going to be productive anyway.

If anything, it could be another sign that the rakyat is increasingly tired of the political shenanigans in the country and is using humour to cope with the situation.

A few people argued that the rakyat got mad at the ministers for no reason because it was just drinking water.

He also questioned whether these netizens are the future leaders Malaysians want.

She also compared the issue to people who buy Starbucks drinks instead of drinking cheaper options like Nescafe or Milo.

Now we are not allowed to drink Evian without getting screwed? I thought the focus was about bigger issues. And this popped up in my timeline 🤣 oh dear… yang belanja Starbucks hari.. kenapa tak Nescafe 3 in 1 je … kenapa hot chocolate… kenapa tak Milo je.. ayo

A netizen explained that it’s called ‘political optics’ and what the ministers did was tone-deaf.

Another netizen added that people who splurge on expensive drinks like Starbucks are using their own money while the ministers spend the taxpayers’ money.