It wasn’t the first time the temple caught fire but the firefighters managed to douse the flames quickly. 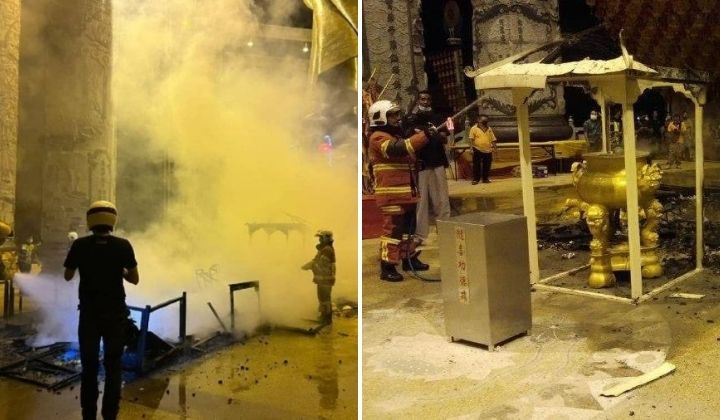 Firefighters arrived just in time to put out the fire at Kek Lok Si temple in Air Itam on Friday, 4 February around 12.50am.

The firefighters only took about 10 minutes to douse the flames which happened near the Kuan Yin (Goddess of Mercy) statue, as reported by The Star.

Due to their timely response, only prayer paraphernalia and the prayer table near the statue were burned and damaged.

According to The Edge Markets, a spokesman for the Penang Fire and Rescue Department said the fire did not affect the temple’s building structure, contrary to what was viralled online.

The Penang Fire and Rescue Department are investigating the cause of the fire and the losses incurred.

If the firefighters arrived late, the temple might have had a repeat of what happened on 12 October last year.

During that time, the 130-year-old temple was damaged in a fire believed to have started from a lit oil lamp.

The fire damaged about 70% of a building in the temple, including one of the prayer halls.

Kek Lok Si, which means Temple of Supreme Bliss, is one of the largest Buddhist temples in Malaysia.

Built in 1893, the temple is a draw for many Buddhists and also became an iconic tourist spot for those visiting Penang.

The temple is known for its striking seven-storey Pagoda of Rama VI (Pagoda of Ten Thousand Buddhas) with 10,000 alabaster and bronze Buddha statues, and the 36.57 metre tall bronze statue of the Goddess of Mercy.