The picture showing the sad meal caught the attention of the Education Minister too. 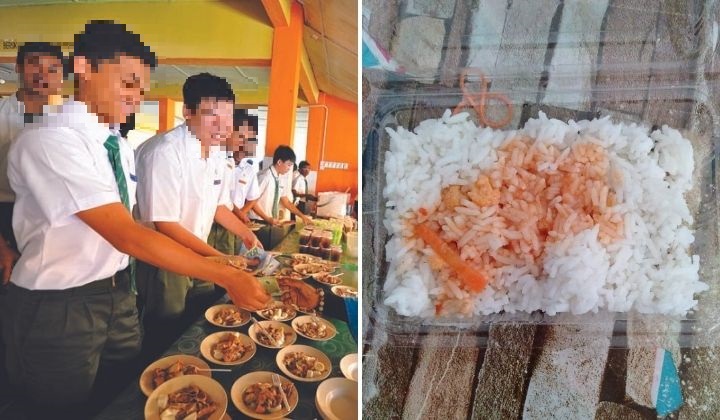 A post recently went viral after it showed a picture of rice with only ‘kuah’ (gravy) that was served to underprivileged students under the additional food programme (RMT).

There were no side dishes such as meat other than a small carrot stick on the pack of rice.

The person who posted the picture described it as a sadistic move to feed school children with little to no food.

She also questioned whether the canteen management was really given such a tiny budget.

While the dreary picture shocked some people, a few netizens pointed out that it’s a norm in schools outside the city.

They advised the Education Ministry to conduct a surprise or unscheduled spot check in schools to prevent situations like these from arising.

Another person shared that it’s the reason why they relied on the parent-teacher association (PIBG) to cook food for the students.

This is because only relying on the budget is not enough.

Netizens also pointed out that there’s a possibility that the child has eaten all the side dishes so it’s best to give a benefit of the doubt.

Another netizen chimed in to say the child, like most children, was probably way more interested to eat the chicken that came with the dish than the rice.

It caught the Education Minister’s attention

The picture understandably drew ire from many people online and it has caught the attention of Education Minister Datuk Dr Radzi Jidin too.

He reiterated that the Education Ministry (KPM) did not compromise when it comes to looking after students’ welfare.

In September 2021, former education minister Dr Maszlee Malik suggested that the free breakfast programme should be reintroduced in schools nationwide.

However, the free breakfast programme that was introduced during Maszlee’s tenure was discontinued in November 2021.

Instead, KPM decided to carry on with the additional food programme (RMT) with some improvements along with the school milk programme for B40 students.