The small sampan sank due to rough waters in Pahang. 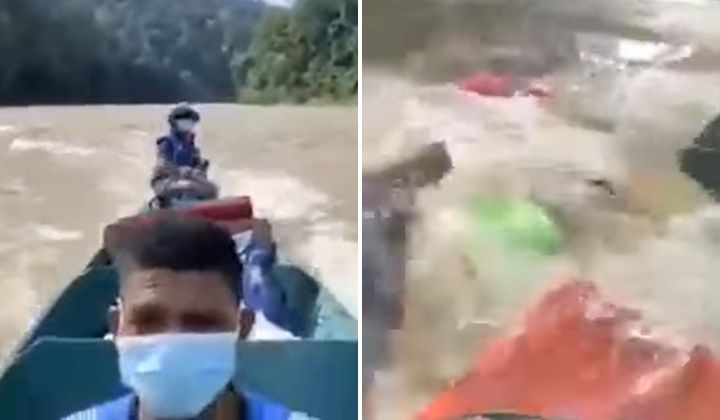 Three Civil Defence Force (APM) officers managed to get to safety after they had to abandon the boat which was carrying flood relief supplies on Wednesday morning, 5 January.

According to Malay Mail, the three officers were entrusted by the Jerantut’s Orang Asli Development Department (Jakoa) to deliver the supplies to five Orang Asli families in Kampung Aur.

The mission was led by Roslan Abu Kassim with his 28-year-old brother, Mizi Abu Kassim, and their boat navigator, Belawak Bajah.

Their journey through the strong water currents at Jeram Panjang to get to Kampung Aur was captured in a video.

The situation at the moment is a bit dangerous but with God’s will, we will try our best to reach our destination.

One of the APM officers said in the video.

The boat they were on managed to get through the fast current but it didn’t take long for the boat to capsize.

The officer recording the video could be heard telling everyone to abandon the boat. The camera then panned to show the flood relief supplies floating away too.

The three men were carried away by the current for about 500 metres before they were rescued by the villagers nearby.

According to Jerantut police chief Superintendent Mazlan Hassan, the officers managed to swim to safer grounds unharmed and were taken to Kampung Kuala Tahan in four small boats.

Netizens were glad that the three officers were safe and unharmed. They pointed out that the strong water currents looked scary too.

A few netizens said the officers should have used a bigger boat to get through the strong currents.