The couple said they received the viral video in a Whatsapp group and only re-shared the clip on their account. 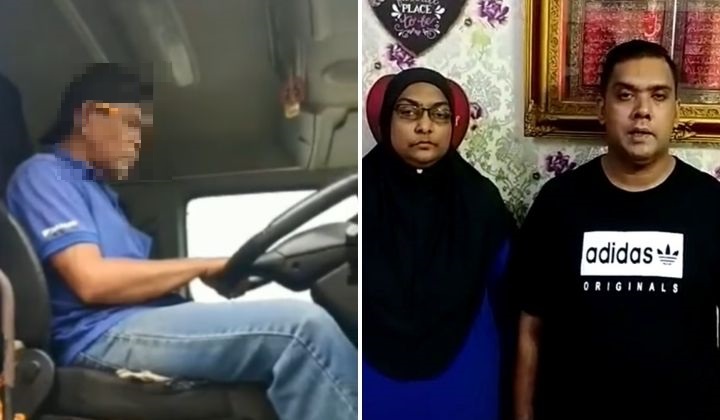 On 3 January 2022, a lorry driver named Ahmad Sukri who was mistakenly believed to be inebriated rammed into cars along the road.

The incident was recorded in a video that quickly went viral. Sadly, the lorry driver was pronounced dead at the hospital due to a heart attack.

READ MORE: “Drunk” Lorry Driver Crashes Into Cars In Sungai Buloh, Turns Out It Was A Heart Attack

Although a lot of people posted the same video, netizens blamed a husband and wife pair for recording the video and making false accusations instead of helping the lorry driver.

The couple decided to explain and clear things up in a TikTok video.

The husband explained that he first received the video through a Whatsapp group and decided to upload the video on his social media account.

His wife also asked for forgiveness from Ahmad Sukri’s family. The couple has made a police report to help clear up matters too.

Some netizens are forgiving and praised the couple for clearing up the issue. They also advised the couple not to share anything that they can’t verify themselves.

“My brother could have been saved”

Mohd Azmi, Ahmad Sukri’s brother, expressed his disappointment because he believes his brother could have been saved if only the people there that day didn’t make hasty judgements.

Based on a report by Harian Metro, Mohd Azmi was told by his sister that there were a few individuals who wanted to help his brother at first.

However, they didn’t offer help after listening to the false accusations saying that the lorry driver was drunk.

Mohd Azmi added that he read that some netizens said his brother should have stopped by the roadside during the onset of a heart attack.

I believe if my brother could withstand the pain, he would have done so (stopped by the roadside) but who knew how much pain he was in then.

After much discussion among the family, they decided to lodge a police report against the woman in the video, the people who shared the video and the negative comments by netizens.

The family didn’t want to make a police report at first but changed their minds so that it’ll serve as a lesson for everyone.

The loss was felt by the whole family. Mohd Azmi said his late brother was a bachelor and a good person.

His brother also financially supported their sister and her four children after the death of her husband in 2017.

Overturned Lorry Carrying Metal Rods In Kelantan Killed A Woman, Injured A Baby And 4 Others