The train disruption has caused many to be stranded due to lack of clear directions. 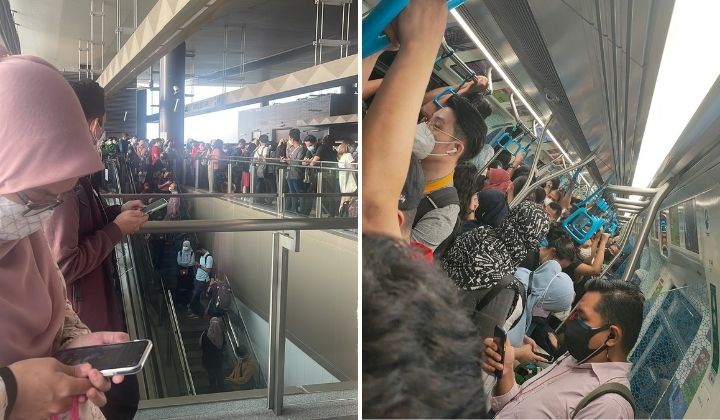 People who were getting to work using MRT Kajang Line today had to disembark at Phileo Damansara due to technical difficulties.

According to Rapid KL, alternate train services are implemented between:

There’s also a shuttle train service between Phileo Damansara and Semantan since both are transfer stations.

Netizens who were affected by the train disruption complained online. People also posted up videos showing the crowded and confusing situation on the ground.

Some of the things they pointed out were the lack of health and safety protocols in the crowded stations and the lack of coordination efforts by Rapid KL.

I am honestly disappointed with what happened today.
1. People are late to office because of “technical difficulties”.
2. No SOP whatsoever inside the train.
3. Polis bantuan dekat platform tengok je tak control crowd lansung.

A netizen questioned why they had to face similar issues every week and whether there’s no proper procedure to perform inspections before operating the trains.

Another person said it was truly unprofessional because passengers were just told to wait.

This is truly unprofessional in terms of public service. No proper procedure and you just let us wait and your announcement is so vague. Normal service will resume shortly? We’ve been waiting here for almost 30 minutes. It would be better if you could do your job efficiently.

They were also told that normal service will resume shortly when everyone has been waiting for a long time.

A few complained about how they felt let down after paying RM50 for the My50 travel pass. Someone said it felt like a betrayal.

READ MORE: “RapidKL’s My30 Will Be Replaced With My50” Says Transport Minister And Netizens Aren’t Happy

Rapid KL apologises for the inconvenience

Rapid KL has apologised for the inconvenience caused during the morning peak hour.

The technical issue was caused by train number 22 when it approached the station.

According to the statement, the disruption will cause the other trains to move at a slower pace and make longer stops.

The alternative routes will be active until services return to normal.