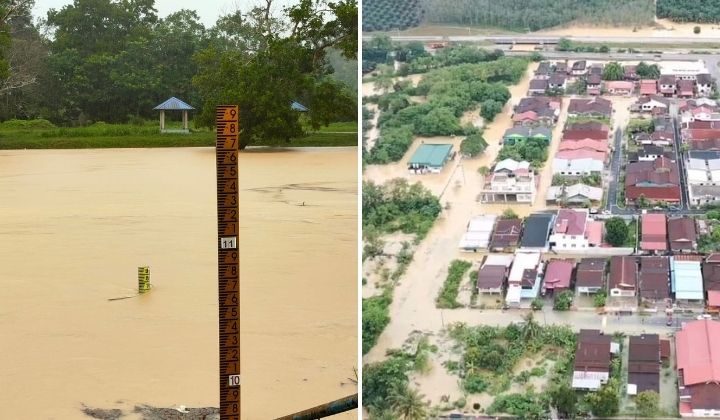 After the continuous rain last Friday night (31 Dec), water levels in rivers rose and have flooded certain towns in Johor.

As of 8 am on Sunday (2 Jan), 28 temporary relief centres (PPS) had been opened. 27 PPS are in Segamat while there’s only one PPS in Tangkak.

According to The Star, a total of 1,646 people from 425 families have been evacuated from their homes in Segamat and Tangkak since the night of 31 Dec.

The most affected areas are:

Due to the rising waters, two roads in Segamat have been closed on 1 Jan.

Jalan Bangas near Kampung Simpang Loy was also closed for about 100m.

The floods have also caused these four roads in Mersing to close:

According to theSun, the water level was at the waist level around 5 pm. The people were rescued using several small boats and sampan believed to be owned by Kampung Lubok Batu residents.

The current flood reminded a villager M. Chandran a time when Segamat experienced a major flood in 2018.

We did not expect the water level to rise quickly. If it continues to rain, the water level will probably rise up to the first floor of the building. Four years ago, the same place was also flooded but not as bad as this.