Rumours have it that the murder is connected to the previous assault on the woman. 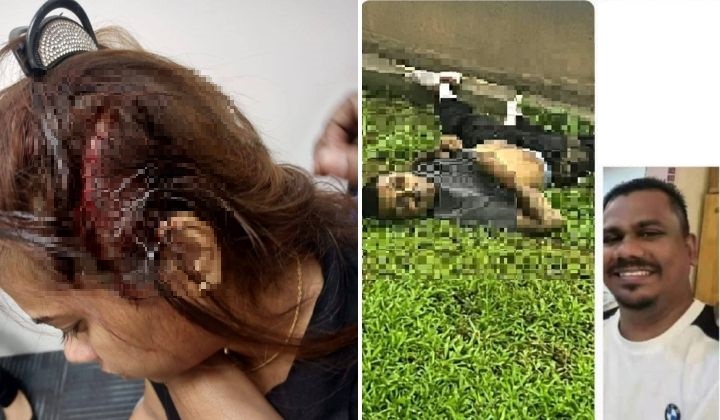 In November 2021, a police officer allegedly beat up a woman for failing to find him a match on a matrimony website.

After waiting for six months, the suspect lost his temper and hit the 34-year-old woman in an elevator in Cheras on 16 November 2021.

The woman suffered head injuries and was treated at a hospital.

READ MORE: ‘Public Servant’ Beats Up Matchmaking Agent After They Couldn’t Find Him A Match

According to Malaysiakini, Selangor police chief Arjunaidi Mohamed said the 35-year-old suspect was a corporal detective in Selangor and not a senior officer.

Based on a tweet by Edisi Khas, it’s believed the suspect’s name is Insp Jayaganesh.

Chillingly, the woman’s husband was murdered recently and rumours abound that it’s connected to the previous assault.

The woman’s husband made a police report against Insp Jayaganesh at IPD Cheras on 25 December 2021. His body was found on 30 December 2021.

It’s said that he had been threatened several times to withdraw his police report.

According to Edisi Khas’ tweet, Insp Jayaganesh is a member of a gang known as 360 Devan and is involved in drug trafficking activities.

Statement from the police

The police have released a statement to refute allegations that a police officer murdered the victim.

The police have received a report about the incident at the condominium from the public. Early investigations revealed that there are no criminal elements in the case.

The victim lived alone and had not been living together with his wife since 7 December 2021 due to marital issues.

Netizens expressed disappointment at the level of corruption in the police force.

A few of them expressed surprise that some police officers joined gangs. This chain of events also caused some netizens to feel afraid.

A netizen added that she’s afraid because there’s a case involving a senior officer and she lives alone.

Among all the negative responses, a person said it’s sad that the image of the police force is tarnished due to one bad apple.

Despite this, they still express their support for the entire police force.

Sebab nila setitik, susu sebelanga rosak….saya still salute majority of our PDRM officers that are effective in performing their duties. Thank you Tuan.

There are those who tried to rationalise what transpired too by comparing it to the Hong Kong film Infernal Affairs.

They suspect there’s an undercover cop in the gang 360 Devan.

Hopefully, something can be quickly done about this to protect other innocent lives.