Most Malaysians do not have natural disaster coverage on their insurance policies because it costs more. 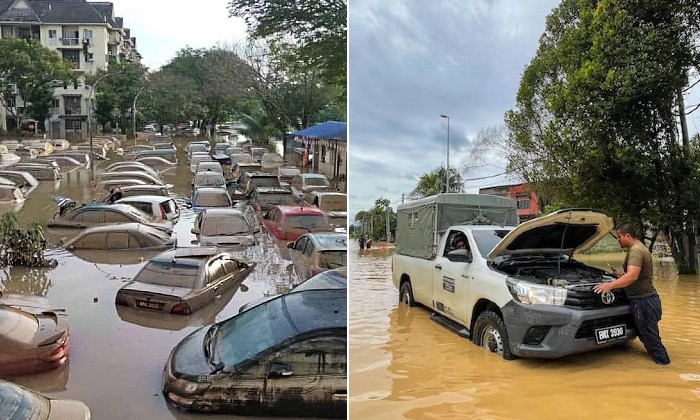 The Federation of Malaysian Consumers Associations (FOMCA) are asking insurance companies to consider offering 50% rebates on vehicle repair costs incurred due to floods as a corporate social responsibility (CSR) initiative to aid victims.

This is because their insurance policies do not cover natural disasters like floods.

Marimuthu explained that most Malaysians are not aware that their insurance providers even offered such coverage as companies failed to advise buyers about the product before proceeding with their purchases.

FOMCA said that they would be sending a request to Bank Negara and the government to get them to tell insurance companies to promote natural disaster insurance coverage to the public.

Marimuthu is also of the opinion that Malaysians have undermined the severity of natural disasters such as floods that are impacting the nation.

Firstly, the majority of Malaysians are not aware that insurance policies offer optional cover for natural disasters like flooding. Secondly, insurance companies have failed to advise vehicle buyers about this coverage before they purchase their policies. Lastly, floods are becoming more rampant and Malaysians, more specifically from Selangor, have underestimated their severity.

Most people don’t have natural disaster coverage because it costs more.

Although there are insurance policies that include natural disasters like floods as part of a comprehensive, all-in-one package, there are those that don’t and would charge extra for it to be included.

Speaking to Berita Harian, the Stable Vision insurance company Executive Director, Richard Low, describe that most people don’t subscribe to insurance policies that include natural disaster coverage because of these additional costs.

He explained that the standard rate for natural disaster coverage for your homes and property costs an additional 0.086% (for floods) and 0.081% (for landslides) of the total coverage amount of an individual’s insurance package.

While for vehicle insurance, premium holders would usually pay between 0.2% to 0.25% of the total coverage amount.

Stuck in the mud?

A report by Utusan Malaysia counted an estimated 50,000 cars were left damaged and broken down across the country due to the floods.

The number of stalled vehicles were especially high in Selangor and Pahang.

According to Journalist Yamin Vong in an article published, again, by Free Malaysia Today, it would cost vehicle owners between RM1,700 to RM54,000 to repair the damage done by floods depending on the size of the vehicle and the extent of the damage.

Most owners would also need to continue on paying for their vehicle loans as it remains immobile and unusable while being repaired. This, he said, could take a period of between three to six months to complete.

Previously, the General Insurance Association of Malaysia (PIAM) and the Malaysian Takaful Association (MTA) urged policyholders to have another look at their insurance policies to ensure that they are covered against floods and advised insurance companies to expedite the payments to victims.

Flood victims are also advised to make a police report on the damages done to their properties and vehicles as soon as possible and snap as many pictures of the damages as they can.

Check out what they’re offering by following the links below: