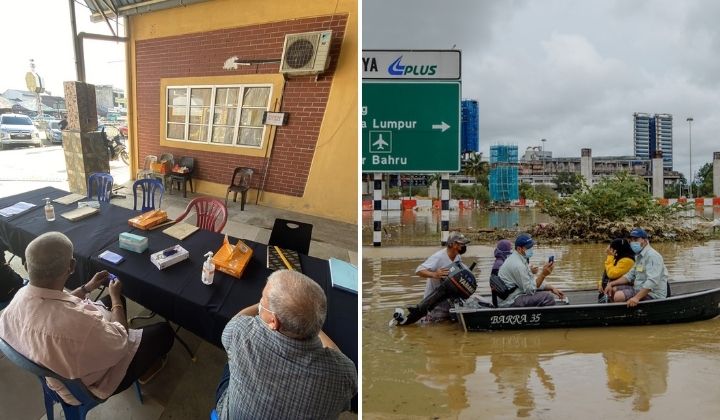 Previously, Malaysians have praised the police for taking the initiative to head over to the flood relief centres so that people can report properties damaged and destroyed by the flood.

The thoughtful initiative was welcomed by flood victims because it made lodging a report easier and convenient.

However, all the good vibes were cut short by a tweet posted on Christmas day.

Based on an anonymous submission, a group of policemen were supposed to man the complaints counter at Medan Selera Karak, Bentong in Pahang from 8 am to 4 pm.

The policemen only turned up at 9.30 am and had the audacity to announce that they were going for breakfast first.

The flood victims who had been waiting since 8 in the morning were left waiting even longer.

Netizens were absolutely livid at the police officers’ behaviours.

A netizen said the police should have taken their breakfast earlier if they already knew they should be manning the counter at 8 am sharp.

Another netizen chimed in and said the young students behaved and knew better than the police.

Someone else said the police were inconsiderate, while another netizen pointed out that the police could have just had their breakfast at the counter.

Sadly, a few netizens added that it’s how the Malaysian civil service works with its prolonged ‘tea times.’

The police released an official statement

Unfortunately, the official statement from the Bentong police department made netizens angrier.

According to a few netizens, it sounded like the police were gaslighting the people.

this would be perfect without the ayat "terbawa-bawa emosi"

The police said sometimes incidents happen out of their control and it’s caused by police officers who were carried away with their emotions.

Despite this, they promised to fully investigate the incident and take appropriate action against the accused police officers.

Anyone with further information is advised to contact Bentong police chief Supt Zaiham Mohd Kahar to help with investigations.