The landslide at Jalan Simpang Pulai-Blue Valley caused two deaths and made the road impassable. 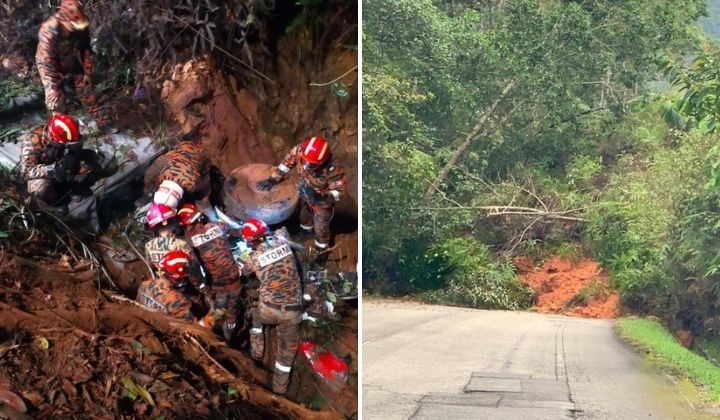 The landslide covered a 100m stretch on both sides of the road, rendering the whole road impassable to vehicles.

According to Kosmo, it took almost 10 hours to retrieve the bodies of the two men from the landslide. No other passengers were in both vehicles.

Perak police chief Mior Faridalathrash Wahid said one of the victims, Muhammad Hafiz Hamdi (31), was a lorry driver, and the other was the driver of a Toyota Vellfire, Tan Chee Heng (36).

The bodies were sent to Hospital Raja Permaisuri Bainun for post-mortem examination.

According to Mior Faridalathrash, the lorry driver was on the way to Simpang Pulai from Cameron Highlands while the driver of a Toyota Vellfire was on his way from Gua Musang, Kelantan to Penang.

He got worried when Muhammad Hafiz did not respond to his messages as he usually does.

According to Kosmo, Mohamad Kamal found out about his brother’s passing from Muhammad Hafiz’s colleague.

He shared that Muhammad Hafiz leaves behind two young children.

Kamal has also informed the other family members on Whatsapp and said the funeral will be held at their hometown in Parit Tanjung Piandang, Parit Buntar, Perak.