The price of crab briyani on the bill was a whole 40% more than the price on the menu. 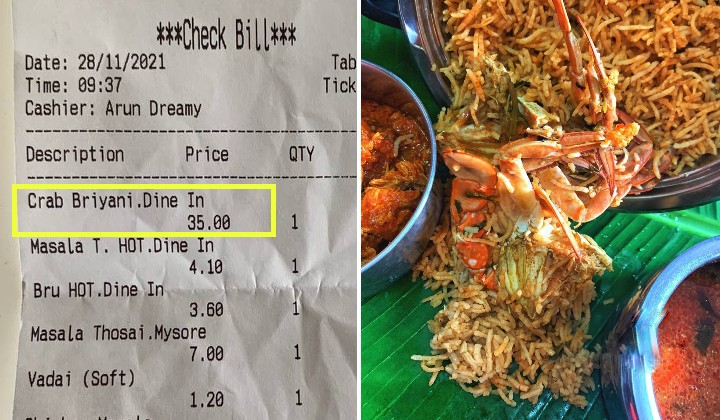 It always pays to double-check your reciepts, as an unfortunate Malaysian found out when he was charged extra even after he complained TWICE.

Twitter user @LOLSuren, going by the name of Idris Halba, recounted his unpleasant experience at a banana leaf restaurant in Bangsar.

Idris noted that he and his wife had ordered a crab briyani at this restaurant. Allegedly, while taking the order, the waiter asked if they wanted the crab to be served separately, because it would be easier to eat.

However, when they were done with the food and went to the counter to pay, they were faced with two items on their bill, namely one order of egg briyani at RM7 and one separate order of crab curry at RM30.

This wasn’t what they ordered, as the couple had only wanted a crab briyani.

Idk, let’s say I ordered a chicken briyani, I’m sure they won’t be charging for the chicken separately just because it’s served on a different plate. That’s just insanely ridiculous.

There was a long queue at the counter so we just left right away.

After insisting that the order was a mistake, the restaurant reprinted their bill, this time with an order of crab briyani as intended.

However, the couple were in for a second rude shock when the second bill stated the price for the crab briyani was RM35!

The price displayed on the printed menu clearly showed crab briyani at RM25, which meant that the restaurant had simply tacked on an additional RM10 to the couple’s bill without explanation.

Wife went back to check on the display and of course it was RM25. So wife returned to the counter again to clear up. Only then the lady at the counter admitted that price has gone up, so IT IS RM35 NOW. 😒

Allegedly, when asked, the cashier gave no reason for the huge price increase- a 40% jump from the original stated price of RM25.

Yet because there was a large queue building up, the couple paid and left the restaurant.

We went because a good friend recommended and we kept seeing long queue whenever we passed by.

The entire experince was a disappointing one for Idris and his wife. He clarified that the food tasted delicious and made for a splendid breakfast, but the way the restaurant handled the bill have turned them off from returning again.

Idris has lodged an official complaint with the Ministry of Domestic Trade and Consumer Protection (KPDNHEP).

Within a day, the ministry has responded requesting for further details such as the restaurant’s location and will investigate further.

KPDNHEP is in charge of protecting the customer’s rights in such incidents, including false advertising, misleading menu prices, price gouging, or unfair pricing.

If you have faced a similar issue, you make find out how to make your own report HERE.

ALWAYS check your bill before paying.

So this happened just now. Ordered crab briyani, waiter asked if we want the crab to be served separately (easier to eat HE CLAIMED) so we said ok. pic.twitter.com/wtU0JHgnAo