Local environmentalist said that its really no surprise to see landslides hitting several areas in Cameron Highlands because of over-development and old infrastructures. 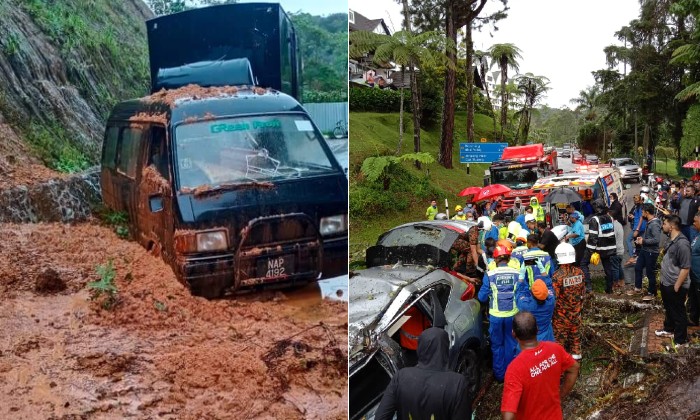 The landslide was said to be at its worst on the 28th-mile marker (Batu 28) on the Tapah road there.

Pictures shared by sources via WhatsApp showed mud and debris blocking up paths and even trapping vehicles.

In one incident, four people narrowly escaped a tree that fell onto their car while they were travelling near the famous Smokehouse Inn between Tanah Rata and Brinchang.

According to Dilip, no one was seriously injured. However, he advised the public to take great care when travelling to and from Cameron.

DO NOT TRAVEL AT NIGHT

Dilip, who’s a local to the highlands, said that people who plan to visit the popular tourist destination shouldn’t do so at night.

The roads that go up Cameron Highlands can get dangerous and as it’s currently the monsoon season, expect more rainy days to come.

The environmentalist explained that with over-development and Cameron’s old infrastructures – such as a drainage system that hasn’t been upgraded in 20 years – the landslide that hit yesterday came as no surprise.

And with so many new projects developing there, Dilip posed the simple question of “where would all the water flow to.”

Read More: Cameron’s Last Unspoilt River: A Visit Worth Your While

Cameron Highlands is no stranger to landslides

Not only is the highlands a popular tourist spot, but it’s also home to a population of over 30,000 people.

In the past, there had been many landslides in the region. The most notable was a mudslide several years ago in Bertam Valley which unfortunately took several lives.