It’s believed that the driver did not have a permit and the van was not up to code. 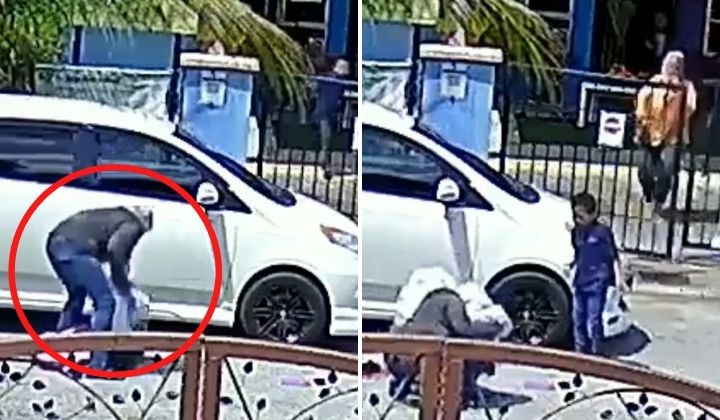 On 12 November, a 7-year-old girl was struck down by a school van at Taman Dahlia, Bandar Baru Salak Tinggi and the whole incident was captured on CCTV.

According to NST, the school van dropped some schoolchildren from Sekolah Kebangsaan Taman Seroja Sepang at a kindergarten that served as a transit point.

At around 12.10pm, a girl is seen walking in front of the van. She was out of the driver’s line of sight and was quickly run down.

The recording showed that the girl was stuck underneath the van and was dragged for a few feet before the vehicle stopped.

A woman then ran towards the victim and cradled the girl on her lap while the people inside the house called for help.

The victim was rushed to the Nilai Medical Centre, Negeri Sembilan at 2.30pm. It’s reported that she suffered head injuries.

Sadly, she was pronounced dead while receiving treatment at the hospital.

Sepang deputy police chief Superintendent Md Noor Aehwan Mohammad said they have recorded a statement from the 31-year-old driver and the case is being investigated under Section 41(1) of the Road Transport Act 1987.

According to The Star, Transport Minister Datuk Seri Dr Wee Ka Siong has offered his deepest condolences to the family of the victim.

It is heartbreaking to hear about the Year One student who was killed when she was hit by a van in Bandar Baru Salak Tinggi yesterday. Condolences to her family members. May her soul rest in peace.

In a report by Kosmo, it’s believed that the driver does not have a permit to drive a school van.

Selangor Traffic Investigations and Enforcement Department chief Superintendent Azman Shari’at said the van is painted white instead of yellow and the van did not have the words to indicate that it’s a school van, indicating that the driver did not have an approved permit.

Due to this incident, parents are advised to only choose school van drivers that are registered with a permit to ensure their children’s safety.

Also, take this opportunity to remind your children not to walk in front of vehicles, even when it’s stationary and to remind ourselves to make sure the coast is clear before stepping on the accelerator while behind the wheel.