A young girl calmly stood on the outer edge of the apartment balcony before climbing back in. 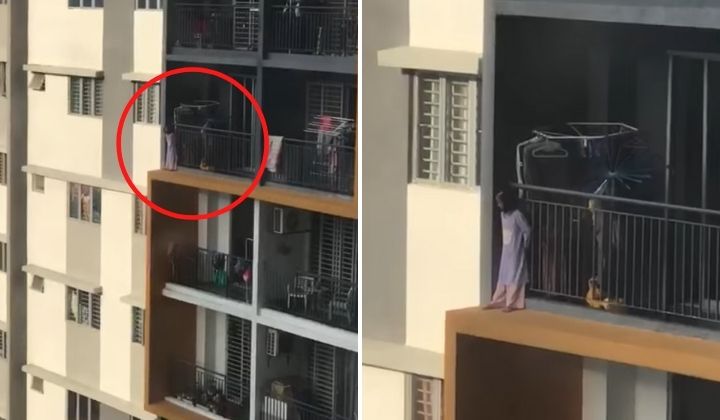 Recently, a video showing a young girl standing on the outer edge of the balcony before climbing back into the apartment building went viral.

According to Kosmo, the incident is believed to have taken place in an apartment at Selayang, Selangor.

While she clambered in over the balcony grill, a younger sibling who looked like a toddler could be seen walking towards her.

Although she got in safe and sound, the short clip was enough to give netizens the chills.

“So scary. I hope the family is more concerned. Aduhhh my heart feels weak seeing [the video],” a netizen wrote.

“Oh this is crazy. I’m stressed watching it,” someone else wrote.

“The small one will learn,” a netizen pointed out.

“As long as she doesn’t carry her sibling over when she climbs. Have to advise her. What if one day she climbs and her sibling falls first?” the next netizen commented.

“Ya Allah, it’s good that the person recording didn’t shout. If they shouted, the girl would have been shocked and would panic. I hope parents will install a metal grill [on balconies] if they live in a house like this so the children can’t climb like this,” another person wrote.

Some of the concerned netizens also provided tips and advice for other parents so they can prevent a situation like this from happening.

“I [installed] an invisible grill on my balcony. Hopefully, I don’t have to worry about the children when I go for prayers or use the bathroom,” a netizen suggested.

A few of them even encouraged the parents to let their children channel their energy in extreme and outdoor sports.

“This kid is so brave. The parent should encourage them properly. There are many extreme sports in Malaysia [such as] wall climbing, rock climbing. There are safety equipments [too]. Don’t reprimand the child. [She] already has the talent. Maybe she’ll make our country proud in extreme sports,” a netizen wrote.

The worried netizens also advised the person who recorded the video to show the video to the parents so that they are made aware of what went on.

The parents have been notified

Based on a few Facebook comments, it seems like the matter has already been settled with the parents.

Previously, a similar incident took place in Putrajaya. A young boy climbed over the balcony railings and continued to walk along the edge of the building.