Tofu went on a little adventure but AirTag made sure he was able to go home. 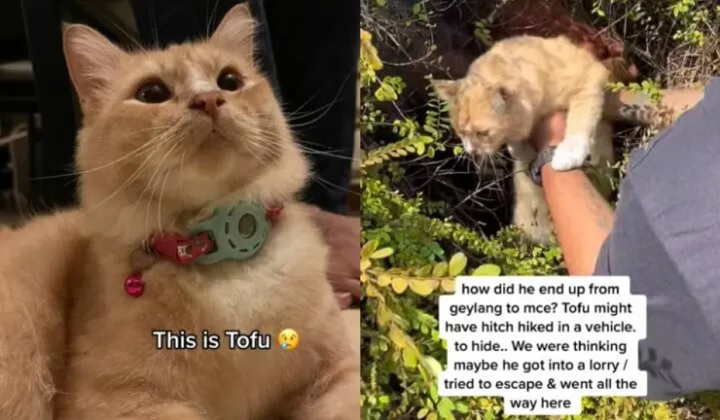 Apple’s AirTag has many uses and as a family in Singapore shared recently, it was instrumental in reuniting them with their cat Tofu.

In a TikTok video shared by user @osrastays, the story began when the family cat named Tofu went missing.

The user said Tofu wore an AirTag around his collar.

“We opened the app and found him located at Marina Coastal Expressway (MCE),” the user said.

At first they suspected someone had removed the AirTag, thrown it away and took Tofu with them.

The user shared several photos of Tofu in the video, a cute ginger cat or ‘Oyen’ as many call them here in Malaysia.

As they went on their mission to locate Tofu, @osrastays said the AirTag then began moving to a nearby carpark.

This made them rethink their suspicion that someone had thrown away the AirTag.

“In our hearts, why would the airtag move if someone threw the tag away at the expressway?”

They assumed then that the person who took Tofu had begun moving around.

At 11.30am on the day they went searching for him, Tofu was seen moving to a carpark off the Marina Coastal Drive.

At 12.30pm, the AirTag moved back to the expressway.

“This moment it was a little bit weird… Why would this person who took Tofu come back to the expressway,” Tofu’s owner said in the TikTok video.

The AirTag was later detected in some bushes in the middle of the highway leading them to assume that someone had tossed the AirTag into the bushes.

While they were not confident that the tag was still around Tofu’s neck, they pursued the only lead they had anyway.

They stopped by the Marina Coastal Expressway and eventhough it was dangerous, they said they did not give up, in the event it was really Tofu hiding in the bushes.

As they approached the bushes, the AirTag beeped like crazy, the TikTok user said.

To their surprise and relieve, the AirTag was still around Tofu’s neck which means they actually found their cat.

“Husband went in the bush and carried Tofu out… poor baby was frightened,” she said.

While they wondered how Tofu ended up on the MCE all the way from their home in Geylang, it was clear that they were thankful to be reunited with Tofu.

“Thank you to our family and friends for your dua’s and well wishes for Tofu boy,” the user posted.

We’re glad Tofu was found safe. Perhaps he just wanted to go on a little adventure, knowing the AirTag would come to his rescue once he felt he had had enough. We’ll never really know with cats!