Yee Sang or Lou Sang was brought from ancient China by immigrants and was called Yusheng, different from the Malaysian version. 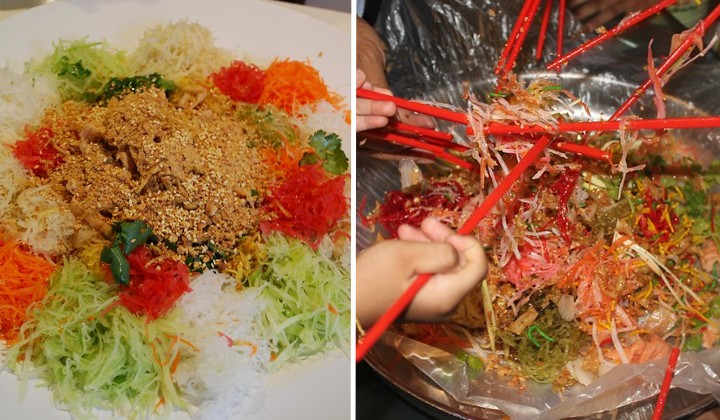 Other than the big dinner reunion, lion dances, ang paos and mandarin oranges, one thing that defines Chinese New Year here in Malaysia is Yee Sang.

This dish is made for a lot of people and the fun thing about it is the tossing part or the ‘Lo Hei’, which simply means “tossing up good fortune” in Cantonese.

In Malaysia and Singapore, the dish is served during the Chinese New Year celebration as an appetiser. Traditionally, it was served on the 7th day of CNY (called Ren Ri) but nowadays people just ‘wing it’, as long as it’s within the CNY period (the first to the 15th day of the new lunar year).

Where did it come from?

Yee Sang originally came from China as just a dish of raw fish called Yusheng, eaten with side dishes separately. It was brought to Malaya by Cantonese and Hokkien immigrants in the late 1800s onwards but the traditional Yusheng was not popular at that time.

Only when somebody in Malaya modified it, did the mixing and tossing start and the Yee Sang became popular.

There are two opinions as to where the popular Yee Sang came about. One is in Malaysia and another is in Singapore.

*sighs* Haih, Malaysia and Singapore, food fights are in our GENES!

Around the 1920s, a man named Loke Ching Fatt came to Malaya and settled down in Seremban. He opened up a catering business but the business was slow after World War II.

Brainstorming to save his career, he came out with the idea of Yusheng and modified it to become more colourful and fun during CNY in the 1940s. His recipe had over 30 ingredients and was a mix of Cantonese, Teochew and Hokkien Yusheng traditions.

He also did it banquet style and people loved it as they could eat it in a big crowd with a joyous atmosphere. His plan worked and around the 1960s, people would come from all over Malaya to try Loke Ching Kee Yee Sang in Seremban.

The mixing or tossing started because of the customers, not because he taught them to. Initially, one person would stand up and mix the ingredients thoroughly and the rest was probably impatient… so they joined and mixed the Yee Sang too. It was faster and more fun to do it together too. And soon, it became a norm.

Fast forward to today, Malaysians still love this version of the colourful Yee Sang that we could eat with families and friends.

In Singapore, they have these four master chefs, dubbed the four Heavenly Kings of Singapore, thanks to their culinary expertise. Back in the day, they worked together as apprentices in a restaurant in the 60s and regularly brainstormed ideas for iconic dishes before they left to launch their own careers.

In 1964, the chefs reinvented the traditional CNY Yusheng with a newer version by adding more ingredients and improving the fragrance, colour and flavour of the dish. They came together to help flourish their business at the time and the customers loved their brilliant creation.

The tossing part was also the same as the Malaysian theory. The customers did it by themselves, and none of the chefs taught them to do so.

Nevertheless, one thing both countries did agree on was, Yusheng came all the way from ancient China and this is a dish to bring people together, not divide them.

What do the ingredients mean?

The ingredients differ over the years with the cook’s creativity, which means some of the Yee Sang may have some other additional ingredients and some may leave them out.

But these are the common ingredients that you can find in most Yee Sang and their bountiful meanings.

How do you eat it?

There’s no right or wrong way in mixing the Yee Sang but there are certain phrases that you should say before you eat it.

Nowadays, Yee Sang comes prepacked if you eat it at home and certain condiments and ingredients are packed separately. These separate ingredients “should” be added onto the Yee Sang step by step with certain phrases for more luck. But well, as we said, there’s no right or wrong nowadays.

If you go to a restaurant, the waiter will pour the ingredients for you (you can do it yourself if you want to) and you can just start tossing the dish with your family and friends.

Aside from that, the phrases usually contain homophones, so the wishes are related to the ingredients. For example, ‘Yu’ means ‘abundance’ or ‘plenty’. The word for ‘fish’ is also pronounced ‘Yu’, which is why fishes became used as a symbol of abundance.

Here are some of the phrases you can say when you add the ingredients one by one to the Yee Sang. Alternatively, you can also say these while the tossing commences too.

When all of the ingredients are poured, using your chopsticks, it’s time to start mixing and tossing the Yee Sang with more auspicious phrases or words.

Some of the popular phrases are “gong xi fa cai” (may you be rich and wealthy), “lou hei” (move upwards), “huat ah” (wish for prosperity) and many more.

And remember, the higher you toss, the more auspicious your year will be. So don’t be afraid to make a mess!

Just don’t waste food too much though. Here’s a creative way to save the mess.

Enjoy your Chinese New Year, everyone!

READ MORE: How Many Calories Are These 7 CNY Snacks Going To Cost You?

READ MORE: Why Is Bak Kwa A Must-Eat During Chinese New Year?

READ MORE: Why Mandarin Oranges Are Given Out At CNY & Surprise Twist: They Aren’t “Oranges”