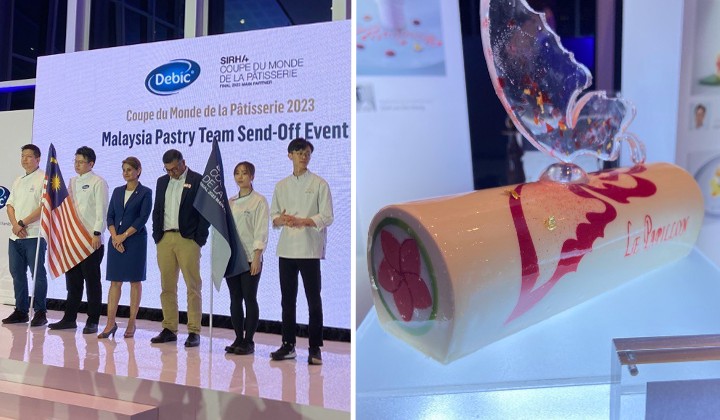 Congratulations are in order to our Malaysian team (Charles Lim and Pui Teng) for winning the Asian Pastry Cup in October 2022 and simultaneously getting a direct ticket to the Pastry World Cup 2023 or also known as Coupe du Monde de la Pâtisserie 2023 (CdM).

On 9 January, Debic Malaysia organized a send-off event for our four Malaysian representatives that are going to be contending against 20 countries to create world-class pastries this 20 & 21 January 2023.

Our Malaysian candidates are:

We had a chance to taste the three award-winning desserts by 2019 Malaysia National Pastry Team which were the Chocolate Dessert named La Nature, the Plated Dessert called La Floraison and the Frozen Fruit Dessert called Le Papillon respectively.

Besides that, we also spoke to this year’s Team Captain, Chef Pui Teng about her team’s preparations to go for the world stage and her personal baking tips.

Usually having around 6 months to plan and prepare the menu for the competition, the team is left with only two months this time, after the delay of the Asian Pastry Cup 2022. Two months is actually quite a short time span for them and it’s quite rushed.

Nevertheless, they will try their best to use their creativity to make Malaysia proud again for this CdM 2023.

In my opinion, apart from persistence and consistency, what’s important to me in making the best desserts are local fruits.

Because we are a tropical country, we use our local fruits to bring out the Malaysian flavours and that’s what makes it unique.

My go-to ingredients that I would use in making pastries are also fresh fruits because they’re fruity and refreshing.

When asked about a specific tip for pastry lovers and chefs out there wanting to follow in her footsteps, Chef Pui Teng just gave a very simple but meaningful quote that she personally holds on to.

The Malaysian team will be leaving for Lyon this Thursday (12 January) and for that, we wish our talented pastry chefs all the best!

For your information, FrieslandCampina is one of the top five dairy producers in the world and they have a lot of brands under it, including Dutch Lady Professional, Debic and others. Debic, a dairy brand for professionals in the baking industry has been sponsoring the Pastry World Cup for more than 20 years now.

This time for the international competition, Debic Malaysia is sponsoring our Malaysian team to the CdM and in an exclusive interview with TRP, Ms Ramjeet Kaur Virik, the Managing Director of Dutch Lady Milk Industries Berhad wishes the team’s success in the competition.

The thing that I’m really looking forward to in the competition is seeing the creativity and innovation that will be produced by these chefs.

I am also interested in seeing how their creations will meet the ‘Climate Change’ theme.

We just want them to have fun and also focus on showcasing their creativity on the international stage without worrying about which products or which good ingredients to use.

Each team consists of 4 members with one coach and three participants. The three pastry chefs consist of an ice cream specialist, a sugar expert and a chocolate maker.

Participants would have to work smart and hard for 10 hours to create 42 tasting desserts and 3 artistic pieces before presenting them to the judges with this year’s theme, Climate Change.

From frozen lollipops and ice sculptures to chocolate artistic pieces and sugar artistic pieces, their skills and talents are both tested. For more info on the dessert challenges, visit here.

Sweeten Up Your Raya With Pavilion KL’s Line Of Decadent Desserts!