The Sound Of Music theatre is playing at Istana Budaya for three weeks until 15 January. 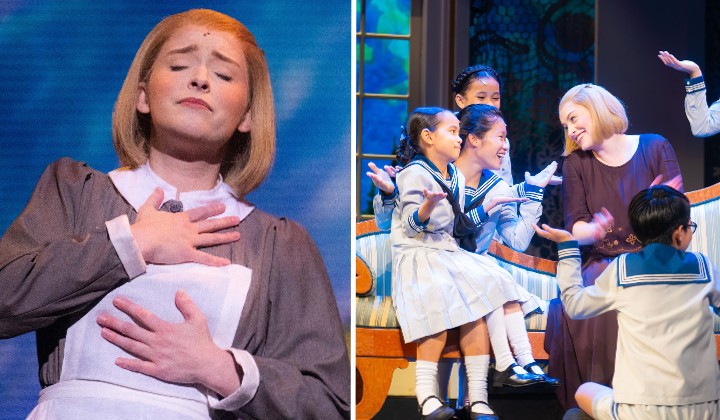 The hills are alive… with the sound of music…

The Sound Of Music (TSOM) Theatre World Tour has finally landed in Malaysia for three weeks.

READ MORE: The Sound Of Music Musical Is Coming To Malaysia This 27 December!

The Gala Night was held on 28 December 2022. Celebrities, members of the media and fans gathered at Istana Budaya to witness the legendary musical, live.

What’s so special about this show is that it’s a Broadway production but Malaysian children were cast as the kids in the play.

I got a chance to see their first show that night at 8.30 pm and here’s what I think.

For those growing up loving this classic musical film, you’ll definitely want to see it. You’ll be amazed by all the harmonious singing.

It’s a 2-and-a-half-hour performance with LOTS of singing. So if you’re bringing someone with you, make sure to bring a person who appreciates the art form.

There will be a 20-minute intermission in between for you to stretch your legs or get something to eat at the kiosk outside of the theatre.

Honestly, I only came here because of the songs and I was in utter bliss that I couldn’t stop smiling and singing along. My personal favourite song was Sixteen Going On Seventeen because that was the song I heard from Vin Diesel’s The Pacifier. And My Favourite Things, because well, Ariana Grande even put that in her 7 Rings song.

But after hearing them all live, my favourite songs from the show were The Hills Are Alive, Climb Every Mountain and definitely Do-Re-Mi.

The performers playing Maria von Trap, Baroness Elsa von Schraeder and the Reverend Mother were some of the singers that blew my mind away. But my personal favourite performer is surprisingly the Reverend Mother. She gave a wonderful performance and it felt like watching an opera singer perform.

On top of that, our Malaysian kids were also remarkable and talented! I surely can’t forget little Gretl’s sweet voice in the play. She’s so adorable!

The kids sang a few numbers together like Do-Re-Mi, My Favourite Things, and So Long Farewell among others. Their voices were incredibly angelic and energetic.

Should You Watch It?

As a girl who’s a big fan of musicals, I’d truly recommend watching this.

Musical lovers will feel elated hearing the cast’s voices right in front of them. From the melodious harmony of the kids’ voices to the stellar solo performances of the talented actors, your ears will be getting a mellifluous treat.

For those new to musicals, you should give this show a try and who knows, this might be the moment you’ll fall in love with musicals. Just be prepared for a long performance.

However, to truly understand the story, you need to brush up on your history of the Austrias and Nazis right before World War II. If not, it’s a bit difficult to understand the politics and issues here.

So, if you’re keen to watch the show, book your tickets here. Get the middle seats too for the best view of the show.

A Little Background of TSOM

The uplifting story tells the life of Maria, a jovial and loving governess who changed the lives of a widowed Naval Captain von Trapp and his seven children by re-introducing them to music. She fell in love with the family and went through great challenges across the Austrian mountains as tensions rose prior to the World War II outbreak.

The Sound Of Music is a production that was based on the true story of Maria von Trapp’s life (well, probably not 100% true). She was in the ‘Von Trapp Family Singers’ which was one of the world’s best-known concert groups in the era immediately preceding World War II.

She wrote a book about her life called ‘The Story of the Trapp Family Singers’ which was published in 1949 and became a bestseller. The book then became a musical on Broadway in 1959 and was made into a movie in 1965 with Julie Andrews and Christopher Plummer. The film remains one of the most popular movies of all time.

If you’re not familiar with ‘The Sound of Music’ you can take a look at the classic trailer of the movie here. Maybe there are a few songs in there you’ll be familiar with.

If you’re interested in watching the play, you should hurry and check if there are any available tickets at Istana Budaya.

READ MORE: We Talked To The Cute Malaysian Cast Of The Sound Of Music – Here Are A Few Of Their Favorite Things

The Sound Of Music Musical Is Coming To Malaysia This 27 December!