It’s a great spot that I only want to share with my close friends and family after swearing them to secrecy. 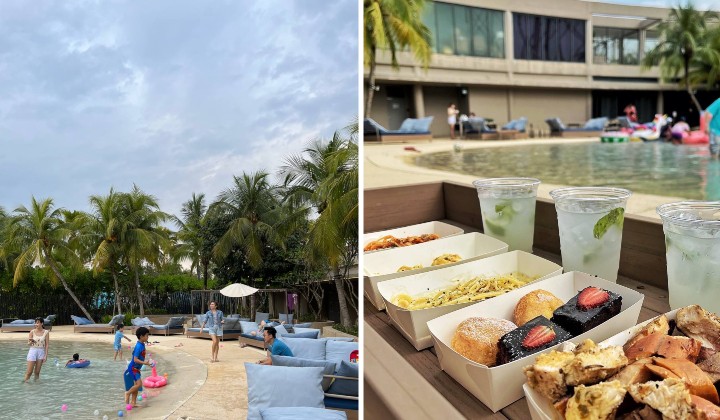 Truth be told, I don’t want to write this article but it was agreed upon in exchange for one day of free access for my wife, our two little boys, my sister, and me at the Beach Pool Club in Gamuda Cove’s Discovery Park.

The Beach Pool Club is basically a restaurant/bar with an attached pool, and once you visit it, you realise this isn’t as common as it should be in the tropical country of Malaysia.

The pool is oddly shaped, deepens gradually from the edges, and is lined with small stones that make it practically impossible for wet or dry barefooted people to slip.

This is important to me as my 1-year-old is still learning to walk, my two-year-old runs everywhere, and neither can swim. They waded into the water to whatever depth was comfortable and splashed about.

There are also floaties in the shape of giant flamingos, unicorns, and sharks, and lifeguards watch over everything and keep everyone safe.

A little grotto under a waterfall that lights up towards the evening is a perfect spot to take pictures any time of day or night, and two sunken dry-seating areas are attached to the pool, so swimmers and non-swimmers can chill and chat together.

I personally preferred to lay back one of about a dozen poolside “beds”. They’re about 6-by-6 feet and very comfortable with four big cushions and a food tray, but there were also many recliners and deck chairs, and four large picnic tables that could each sit around eight adults.

Under a bright shining sun, the whole place looks like it was plucked out of a movie filmed in Miami or L.A. Even the washrooms are remarkably Instagram-worthy.

If things get too warm for you, inside the restaurant is air-conditioned and there are tables and booths, as well as a bar to sit at. It’s pleasant enough, but we forgot to take pictures for a very good reason.

When we went, there was a buffet which my wife stormed again and again like it was the beach of Normandy and she was a fearless Allied soldier.

They were serving roasted meats with an array of sauces and good quality hotdogs, tacos and nachos, made-to-order pasta, and desserts like cakes and cream puffs, and ice cream.

Halfway through our visit, they set up a wok outside and fried kuey teow on the spot.

Also during the entirety of our visit, there was a DJ spinning dance tunes, joined by the occasional dance performance and at one point, even a live saxophone player.

The buffet, the DJ, and the live performances are temporary.

The Beach Club is holding a pool party promotion from 11am to midnight on Christmas Eve and New Year’s Eve.

A post shared by GL PLAY by Gamuda Land (@glplay.my)

For RM98 per person, you can spend a whole day at the pool, stuffing your face at the aforementioned buffet for lunch, tea, dinner, and supper.

Then at night, you can continue to party and greet the new year in style.

Not only that, but they’re also throwing in a ride on the Cove Aerobar, which is a dining table about 100ft in the sky located just outside, and those who spring for the couple’s combo package priced at RM178 will also get to ride the nearby Goosebumps Rope Course.

For kids aged 3 to 12 years, the price is RM45, while kids under 3 enter and eat for free with a paying adult.

It’s a solid deal, especially for families, couples, and groups of friends who have yet to make plans this New Year’s Eve, have the day off work, and want to party affordably but in style.

This leads to the reason why I feel “forced” to write this article: I don’t actually want people to know about this. I want to keep it for myself.

It’s a great spot that I only want to share with my friends and family after swearing them to secrecy because I foresee it filling up fast once people learn about it.

But a deal’s a deal. Thanks for a great time, Gamuda. We’ll be back soon.