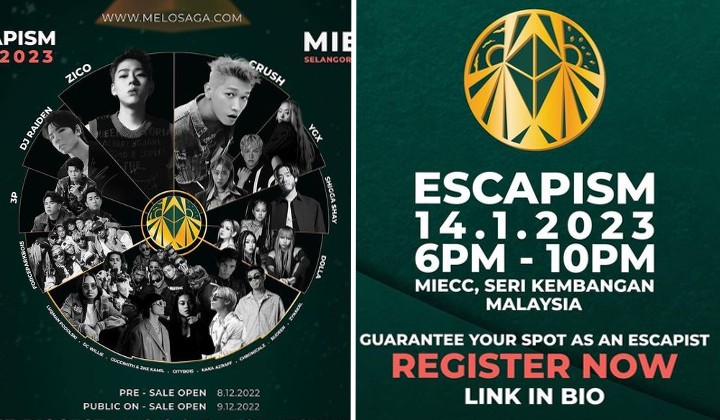 Malaysian K-Pop lovers, boy, have we got news for you.

There’s a K-Pop concert coming to Malaysia this January! Not only that but they have two other main events filled with fun shows and activities.

Spanning over three days, Melosaga has three events which include Escapism; the concert, Battle Saga; international and local dance competition and K-Dimension; K-Culture Carnival with over 100 booths.

Here is the full lineup of artists and groups performing on the day from 6 pm to 11 pm.

Battle Saga is a mix of local and international dance competitions on 15 January which includes RF Jam Malaysia Qualifier Round and SDACA Championship.

For the former, winners from the 4v4 Breaking and 3v3 All-Style will win sponsored trip to RF Jam 2023 in Vietnam. For the latter, international and national all-star dancers will compete to become the champion of Battle Saga.

K-Dimension, a Korean pop music carnival with more than 100 booths and various activities is happening from 13 to 15 January.

Among the main highlights are the YG audition, K-Dimension Dance Cover Championship, The Phaze International 2023 and YGX Dance Artist Workshop.

Just to make things clear, YG Entertainment is the agency behind the success of Blackpink and Big Bang. If you wanna be in the agency, you gotta polish those talents and skills, guys.

Tickets for Melosaga (without Escapism) are only RM35.