Aerial Marker Balls are installed on power lines for both of the safety of low flying aircrafts and the electrical infrastructure. 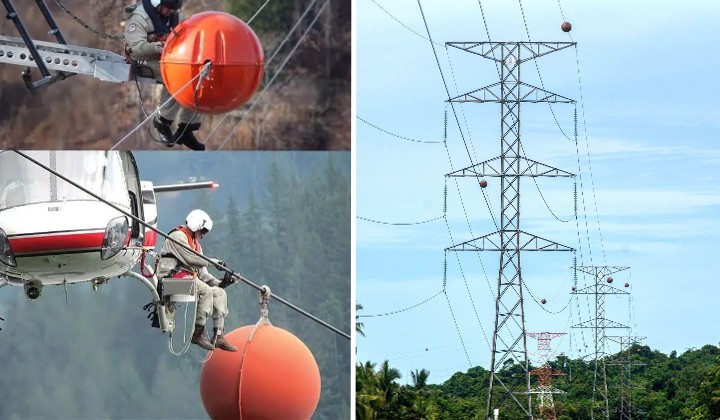 First of all, the electrical tower is called a Transmission Tower. Second of all, the wires are called Power Lines. Third and most importantly, those aren’t basketballs, those are Aerial Marker Balls. Well, at least we’re right about the balls.

Since we were kids, some of us have been wondering for years about those brightly coloured balls hanging on the lines of electrical wires. Are those basketballs? Are those seasonal decorations? What are they doing there?

Well, now is the time to finally unravel the childhood mystery.

Aerial Marker Balls & What They’re For

Aerial Marker Balls, as the name denotes are spherical markers used on the power lines to warn pilots of electrical infrastructure. They are also known as Aerial Visibility Marker Balls or Aircraft Warning Sphere.

Marker balls allow the electrical wires to be visible for low-flying aircraft and helicopters, especially during times of low visibility or inclement weather. They weigh about 8 kg each and are 50 cm to 90 cm in diameter, depending on the place of the power lines.

They’re noticeable thanks to their bright colours. Most balls use the ‘International Danger Orange’ colour but you can see them in yellow, red, or white too in other places.

Other than the spherical warning balls, balisors can also be used to serve the same purpose. Balisors are illuminated beacons made from special neon lamps.

Here’s an example of how the markers balls are installed, as reported by Bernama. The construction workers had to hang horizontally on the power lines.

Alternatively, here’s another video of how the balls are installed in the US. This one uses a helicopter.

Some people speculated that the spheres are there to weigh down the power lines to avoid wild wind movement. Some assumed they have cameras inside for speed control surveillance. Some even guessed that they have weather sensors inside.

What was your guess about the function of these warning spheres initially?

READ MORE: Ever Wondered Where These Beetle-Looking Bugs In Our Rice Pack Came From?

READ MORE: Ever Had Those Random Songs Stuck In Your Head? – Earworms & All About It

READ MORE: What Are Those Triangular Sticky Rice Things Wrapped In Leaves?