Fifty/Fifty was shot mostly in Penang and had several familiar Malaysian faces in it. 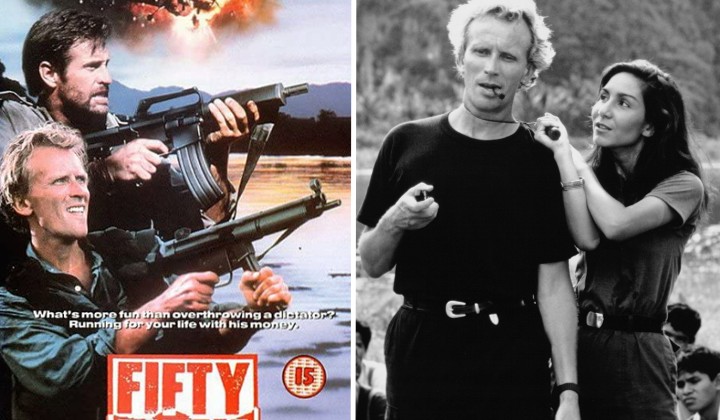 Veteran Malaysian actors and actresses are not to mess with. They’ve been in Hollywood movies, you know.

Ramona Rahman is a Malaysian actress and voice actor who rose to fame in the late 80s but has retired from acting.

In 1992, she starred alongside Robocop actor, Peter Weller in a Hollywood film called Fifty/Fifty. Crazy thing was, she was not the only Malaysian to act in the film, there were other famous names who held supporting roles in the film.

How come so many, you wondered? For starters, the film was shot in Malaysia.

Let’s take a walk down memory lane in the early 90s to know more about this Malaysian star-studded movie, shall we?

The 1992 film Fifty/Fifty has Malaysian casts

Fifty/Fifty was a 1992 American action-adventure comedy film that was mainly shot in Penang, Malaysia.

It’s about two squabbling mercenaries, Jake Wyer & Sam French (Peter Weller & Robert Hayes) reunited by the CIA to take on a mission on a Southeast Asian island called ‘Tengara’ (but pronounced Tenggara), filled with riots and a revolution to overthrow a dictator.

Aided by a beautiful & brazen freedom fighter, Suleta (Ramona Rahman), they must raise an army to overthrow the power-mad dictator.

With the unlikeliest band of locals, which includes Mr Os and Dharma Harun Al-Rashid, the two military-trained heroes must prep these determined soldiers to fend for their nation and topple the cruel regime.

Mr Os is no stranger to our film industry, with a string of comedies in the 80s and 90s to his name such as Hero, OK, Kembar Siam, among others.

Many would remember Dharma Harun as the lead in the classic hit Adik Manja next to Noor Kumalasari, a movie about a group of college girls who found a baby in their hostel.

Another famous face in the movie is ‘Ali Setan’. Azmil Mustapha plays Colonel Kota who is the evil dictator’s right-hand man.

Apart from Ramona Rahman, other Malaysian veteran actors can also be seen in the movie as the natives of the island. Shooting their scenes in Malaysia, most of the cast and extras were Malaysians too. You can hear the locals and the soldiers conversing in Malay in the movie.

Here are some of the many Malaysian casts and their characters in the movie.

Catch a clip of the training montage in the Fifty/Fifty film here.

Turns out our veteran actors and actresses were pretty legendary, right?