At The One Academy, students are taught to be risk-takers and learn from both their successes and failures. 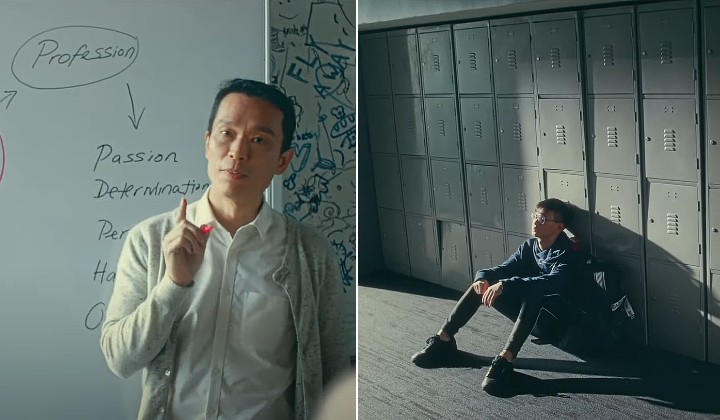 We’re sure many of you out there have fond memories of that one teacher who was your favourite and stood out from all the rest.

They might be the cikgu who taught you to be yourself. Maybe it’s the college lecturer who encouraged you to never stop trying.

Whoever they might be, teachers play a vital role in mentoring future generations into becoming the best that they can be.

But being a teacher is never easy. For the ones brave enough to do it, education is a lifelong commitment that can be both challenging and rewarding at the same time.

For Lin Yew Cheang, being an educator is all about inspiring young minds to realise their true potential.

“It’s always fascinating to educate our young minds because you can see the kiddos’ infinite potential, imagination, and innovation. And I’m always proud to see my students excel in their careers or whatever they choose to do,” said the 49-year-old educator, who now focuses his time on passing along the knowledge and experience he’s gained after years in the creative field to nurture the next generation of talented artists, designers and creators.

Lin Yew, who is the Department Head of Digital Media Design at The One Academy creative school, admitted that he never really set out to become an educator, but found his calling when he was inspired by the people he calls his mentors.

As an educator in the creative industry, Lin Yew knows first-hand the challenges and difficulties it takes to succeed in such a cut-throat trade and tries his best to create an environment for students to excel in and break the glass ceiling.

We endeavour to create a support system where students can feel inclusive, understood, and also be critical about their decisions and what they want in life. As educators, our faculty works to cultivate students to be risk-takers and always have the courage to try things, and learn from both their successes and failures.

He explains that it is important for educators to build trust among their peers and with their students, besides being innovative with their teaching methods.

Lin Yew added that The One Academy actively conducts workshops, hackathons, and live projects, as well as organises field trips and international “masterclasses” with industry giants to help students develop both the technical and interpersonal skills needed to send them out into the world with a global and professional mindset.

“Success will never come without immersing yourself and diving head first into a particular situation,” the digital media guru offered, a piece of advice he also shared in a special short film titled: Gameboy based on the true life story of The One Academy’s alumnus P’ng Yi Wei.

Yi Wei completed his diploma in Digital Media Design at The One Academy with a lifelong dream to build his own game empire.

Although it took some time to convince his ol’ skool father of his artistic ambitions instead of becoming the typical doctor or lawyer, Yi Wei proved that with passion and hard work, anyone can achieve their goals.

Yi Wei and his indie game studio, Kurechii, have amassed an impressive 13.7 million players from around the world with award-winning mobile games like Postknight, Tiny Guardians and King’s League: Odyssey.

Like many of his colleagues, Lin Yew feels proud of his students’ achievements and encourages everyone to be go-getters.

Do what you love! It’s the best motivation to complete all the missions you have set to realise your vision. However, one should have the mental preparation that an awful load of self-discipline is the big key to bringing your dream to fruition. You should be responsible for the decisions you make, jump out of your comfort zone, and always be prepared to face the consequences.

Realising that some people (like the stereotypical Asian parent) may be obstinate about letting their children venture into the creative field, Lin Yew reminds everyone that having the right emotional support in our endeavours also determines if we can triumph or flounder in life.

Robert F. Kennedy once said that only those who dare to fail greatly can ever achieve greatly! Parents need to build trust with their kids and realise that failure is only a temporary detour, not a dead end. Support your child by giving them strength as well as access to the right education that can help them expand their abilities and at the same time, help them be more resilient in managing challenges that will come their way.

If you’re looking for inspiration to follow your own dreams, check out the uplifting short film based on the life of The One Academy alumnus P’ng Yi Wei and his journey to accomplish his ambitions, or head on over to The One Academy’s official website for more stirring tales of success.