We interviewed Kimaya, Christian and Lafayette who plays Gretl, Friedrich and Kurt respectively. 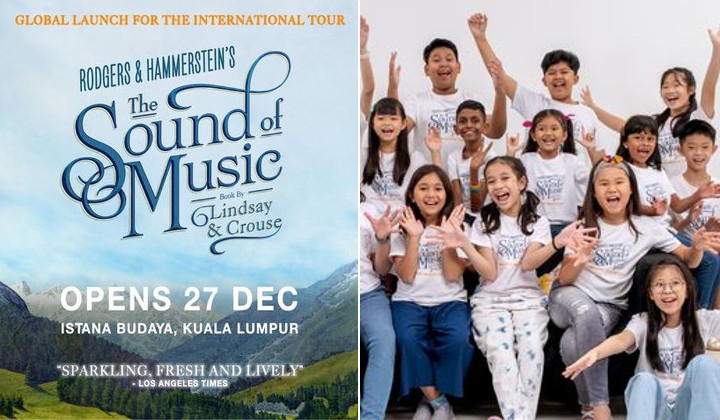 The Sound Of Music musical theatre production is making its way to Malaysia all the way from Broadway. On their international tour, they’ve been doing shows in several countries around the world along with the local talents.

READ MORE: The Sound Of Music Musical Is Coming To Malaysia This 27 December!

This December, they’re coming to put on a show at Istana Budaya with 17 of our talented Malaysian kids who went through deliberate auditions – they had to fight with over 400 applicants for their parts.

Within the musical, Captain Von Trap has 7 children but they only made 6 available parts for the kids. The 17 kids are going to play the parts on a rotational basis for three weeks.

Luckily, we got an exclusive interview with 3 of the kids playing the parts of Friedrich, Kurt and the littlest one, Gretl.

Let’s get to know more about them.

How they got in, their favourite things & their hopes

Hearing the audition from their mothers, the three young actors tried their best for the audition and successfully got the parts.

Noticing their fierce passion for singing and acting, their mothers thought that this would be a great platform for their kids to express their love for the arts. Kudos to their moms for keeping tabs!

With each and every one of these kids expressing their love for musicals and theatre, they all have different backgrounds and interests that keep them going.

Let’s get to know some of the actors and actresses personally.

When Christian first saw the classic musical a long time ago, he realised that this particular musical is not like others that he’d seen before at his particular age.

Although they are some underwhelming parts, he feels that The Sound of Music has a very good arrangement in terms of music, storyline and the character’s feelings. It doesn’t usually have much of the “bursting into songs in the middle of nowhere” like other musicals do but he quite enjoyed the story.

This is not the first time he’s in a musical. Christian has also participated in his school production before in a play called ‘Joseph, The King of Dreams‘ playing the brothers of Joseph.

As major fan of theatre and the creative arts, Christian’s favourite musical is Hamilton, the recently put-out Broadway musical produced by Lin-Emanuel Miranda, telling the historical figure of Alexander Hamilton. He liked it the most because it was the first musical he watched. Because of that, he’s been hooked on the world of singing and acting ever since.

Basing his love for musicals on his favourite 2015 musical, Christian’s favourite actor or singer is Lin Emanual-Miranda. Not only is he a talented actor, but he sings, writes and composes music pretty well too, and this made Christian want to follow in the footsteps of the multi-talented idol.

Playing the role of Friedrich in this upcoming musical, he said that the character suits him well and he even prepared some jokes to tell on stage that resonates with his character.

A few of my favourite things are my guitar and my cat.

A few of Christian’s favourite things are his guitar (it explains the picture) and fluffy cat while his favourite song among all in the musical is The Hills Are Alive. Apart from being catchy, he’s fond of the opening song because we can see Maria expressing herself eloquently there, which adds depth to the story, in his opinion.

Later on, he hopes to get into more theatre production and become a professional actor that could share his talents with society. We hope we’ll be seeing his face on billboards one day.

Lafayette, on the other hand, said that he could sing first before even taking, which proves how much he likes musicals. His favourite musical of all time is High School Musical, the series because it tells a story of how the teens break free from all of their life drama by singing. No, not with Zac Efron & Vanessa Hudgens, it’s the one with Olivia Rodrigo.

When Lafayette first saw the Sound Of Music, he loved how a family can just come together suddenly through all odds and how they adapted a family’s real-life struggle into a beautiful musical.

Being a boy with an enthusiastic gift of the gab, Lafayette expresses himself with a love of music and acting. He used to think that whatever you saw on the TV is really happening and those were actually the lives of someone living their own happiest life. So he started to act like his life was really a sitcom, and learnt about acting along the way.

So his point of view was, if you live your own best life, you’ll get featured on TV. Wouldn’t life be easier that way?

Other than his two pet Border Collie dogs that he owns named Bear and Archie, a few of Lafayette’s favourite things are his Legos. From three-story buildings and intricate vehicles to miniature people, he collects Legos and even films them in stop-motion videos.

A few of my favourite things are my two pet naughty dogs and Legos.

Playing the role of Kurt in the play, Lafayette loves the Do Re Mi song because it’s simple and catchy. It’s also a very good song to teach musical beginners about Solfège (Do re mi fa so la ti do). If he were to teach anyone about singing and hearing notes effectively, he would just straight away play this song.

Although Zendaya and Joshua Bassette are some of his favourite idols, he actually doesn’t wanna be exactly like them. They have their skills, yes for sure, but he aspires to be well known because of his talents and name.

For the future, Lafayette hopes to walk away with various lessons and experiences in theatre. He would also love to master the skills of improv, as he believes that that is a valuable skill, needed in every single second of theatre.

Kimaya, the youngest of them plays Gretl in the play. Being a budding child actor, she hasn’t had any theatrical experiences yet, but her passion for singing shines the brightest among them all.

When she first saw the musical, she saw a lot of singing and music in there, which is let’s face it, her forte. It’s a no-brainer how she loved the musical.

But when asked about her ultimate favourite musical, she revealed that it’s Mary Poppins. Especially the part where she swoops into the scene magically with a flying umbrella. Who doesn’t love all that magic, right?

With her favourite song being A Few Of My Favourite Things, her own favourite things are singing and animals, especially cats. It’s the fluffiness that gets her so obsessed.

A few of my favourite things are singing and animals, like cats.

Kimaya has an affinity to her idol, Ariana Grande but just like Lafayette, she wants to grow up and let the world know her for her own voice and name.

Kimaya’s hope for the future is to be involved more with music, singing and dancing as she aspires to be a singer. Let’s hope to hear her voice nominating our music charts in the future.

Although they’re quite different in a way, their passion for music and the performing arts are things that unite them together.

We can’t wait to see these talented kids on stage performing for us this December.

The limited-time show will only be available for three weeks starting on 27 December. You can book your tickets for this December show here.