This year’s GVW2022 was held at Surf Beach in Sunway Lagoon last 23 and 24 September. 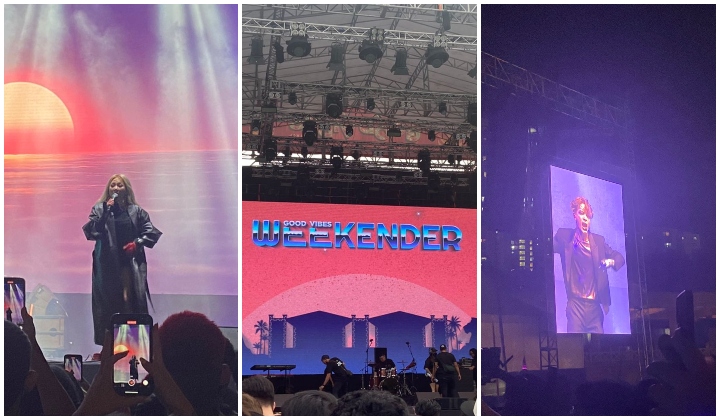 After two years of hiatus due to the pandemic, the musical festival – Good Vibes is back in 2022 with a lot of local and international artists.

This year’s Good Vibes is a bit different as it’s called the Good Vibes Weekender (GVW) and was held at Surf Beach in Sunway Lagoon.

When it all started

Since its inception in 2013, GVF was a one-day festival done at the Sepang Go-Kart Circuit. But after they gained much traction, they switched the venue to The Ranch at Gohtong Jaya, Genting Highlands and expanded to a two-day event.

The number of artists and festival-goers also increased through the years. From a 5,000 to 20,000 turn up rate, the festival slowly became one of Malaysia’s most popular live music festivals.

Here’s what went down:

This year’s festival has two stages which were the Red Stage (left stage) and Blue Stage (right stage), placed right next to each other. There are also two tickets for admissions which were the General Admission (RM499) – that’s us – and VIP (RM999) – OKK one (Orang Kaya Kaya 👀).

There was a long line of people queuing at the entrance of Sunway Lagoon, waiting for the gates to open at 4 pm. When it opened, everyone flooded the Surf Beach – which they drained all the water out from – trying their best to find a good spot.

The festival started at 4.30 pm with performances from local artists like Alex Ungku, Claudia, Dolla and Midnight Fusic. Even though they were only given 30 minutes to perform, their gigs were amazing. The crowd went crazy when Dolla showed up, singing their hits and dancing like a K-Pop girl group.

Starting from Surf Mesa‘s performance at 6.30 pm, the next artists were given an hour to blow the socks off our feet. Trust us, our socks were blown off with all the jumping, yelling and dancing, especially when Surf Mesa played one of his popular remix – ily (an EDM cover of Frankie Valli’s I Love You Baby).

Snakehips followed Surf Mesa afterwards with his EDM performances as well. The crowd vibed, enjoyed and sang along when he played their popular song – All My Friends.

Next up at 8.30 pm was Oh Wonder, which consists of newly-married couple Josephine Vander Gucht and Anthony Westand. They told us a bit about themselves and the songs they sang, which were based on their love lives. Josephine even write a song about Anthony’s ex! We’re not gonna lie, it was a good song.

Josephine also introduced their band in Malay and tried her best to speak the lingo. She even said “Mak Kau Hijau“, proving that she’s also in the know about Malaysian pop culture!

We were then wowed with performances from our local singers/rappers Sona One and Joe Flizzow who performed together on stage. They also performed their individual songs too. Some of the popular songs they’ve performed were Satu Malam Di Temasek, Apa Khabar, Havoc, Sampai Jadi and No More.

CL stole the show for the first day

The first day ended with a performance from none other than the Korean singer Lee Chaelin or better known as CL. CL was one of the members of a popular K-Pop group, 2NE1 with their greatest hit – I Am The Best. However, all four members have parted ways to focus on their solo careers.

CL’s very dashing professional DJ played some remixes for around 20 minutes before the K-Pop star began her performance with Spicy.

After performing some songs like Tie A Cherry and The Baddest Female, she closed off the night with Hello Bitches. We didn’t really know much her songs that well but wrong lyrics or not, we definitely vibed.

One thing about the festival that was a bummer was how hot it was. CL even said that she really wanted to take off her long jacket but didn’t wanna get in trouble.

Day one ended at 11.30 pm and just like the entrance flow, the exit flow was super crowded too. We managed to get out to the front gates around 12.10 pm. Imagine the stairs and the massive crowd. It was quite the cardio journey, alright. 😮‍💨

Like the first day, the doors opened at 4 pm and at 4.30 pm, the first line-up, liesl-mae started playing. She is then followed by The Peachskins, Late Night Frequency, Leaism, NYK and Yonnyboii, all performing their songs for 30 minutes each.

Starting with Shallou at 7.30 pm, the rest are given an hour to entertain the audience. Shallou was also entertaining, making us go up and down with his EDM hits.

Beabadoobee performed with her band next, singing her Indie Rock songs. For us personally, her songs sound like a mash-up of Avril Lavinge and Billie Eilish which we quite enjoyed. 🤟🏼

At 9.30 pm, Pink Sweats stole our hearts with his performances. As the name implied, all the men in the band were in pink clothes! And they even had a big pink balloon bear on their set. We can’t handle the cuteness.

Pink Sweats performed his best songs including Honesty, 17 and I Feel Good. During the I Feel Good performance, he also surprised us with a local guest singer, Bungaisme, who sang a duet with him.

He then closed his performance by getting all of us to sing At My Worst, together. It was a spectacular moment. ✨

The finale for the second day was Jackson Wang. We got to tell you, Jackson Wang’s fans were a different breed. As soon as Pink Sweats said goodbye, everyone rushed to the Red Stage and automatically, their hands became extremely longer – everyone was holding their phones out to catch a glimpse of the guy.

We actually can’t even see him properly on stage – we watched him on the screens of the people in front of us – and finally settled for the big screen.

Jackson Wang was actually one of the members of a K-Pop boy group named GOT7. With more than 30 million followers on Instagram, his Malaysian fans sure went berserk that night of the performance and we finally understood why – he was so handsome talented!

He performed songs like Cruel, Blow 100 Ways and Blue that night. But the most interesting part of it all was when he said goodbye to us all and then came back on stage to ask a very ‘pertinent’ question.

“You guys know where my crew and I can go to eat after this?”

Where to eat and what to eat? These are very important questions, indeed. What entertained us more was the suggestion that he got from our audience.

Why yes, Mamak, a very ideal lepak place for us Malaysian to chill and grab something to eat at night. Did Jackson Wang and his team go to Mamak afterwards? We never got to know.

All in all, Good Vibes Weekender 2022 this year was such a hoot! We can finally enjoy festivals properly after two years of social distancing.

However, we just hoped there would be more trash cans around the area because there were lots of plastic bottles after the performance ended.

We hope next year will be an even better experience! Till then, Good Vibes!

READ MORE: First Time Heading To A Concert? Here Are The Do’s & Don’ts You Need To Know