LEGO Super Mario is exactly what you’d expect a 3D version of the classic 8-bit video game to be. 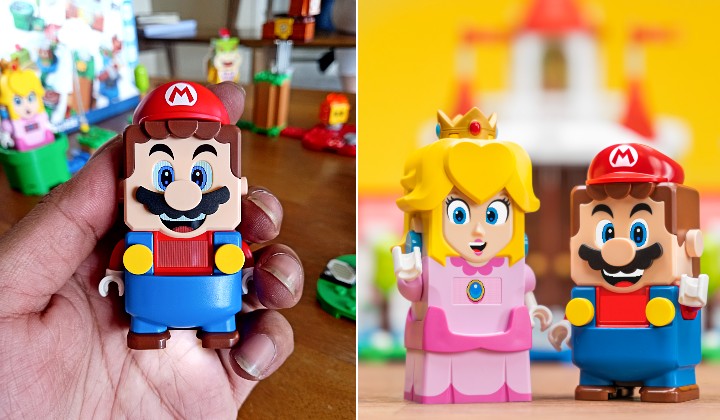 As a kid who grew up in the 90s, there’s a special place in my heart for LEGO bricks and Nintendo games. I still have fond memories of assembling those simple blocks into imaginary artefacts and foolishly blowing on those ol’ skool game cartridges to play a few rounds of Super Mario Bros.

So when the LEGO company was kind enough to ship us, not just one, but three of their expandable LEGO Super Mario Adventures kits, I was more than happy to indulge in nostalgia and give the Toy of the Year a go.

Showcasing a miniature world you can piece together, explore and interact with in almost any way you please, LEGO Super Mario is exactly what you’d expect a 3D version of the classic 8-bit video game to be.

The kits perfectly encapsulate the LEGO DNA where every brick and block can be fixed in multiple ways to become anything and everything you imagine, together with the whimsical characters and set pieces from the magical Mushroom World.

There are three main interactive figures for you to choose from to begin crafting your own LEGO Super Mario adventure: Mario, Luigi and Princess Peach.

Each of these ‘starter course’ kits comes with unique pieces for you to assemble into a real-life Mario video game level that you can play like a board game with its own Mario-themed twists.

A game with no rules

Getting started with LEGO Super Mario is super easy!

Assembly was a piece of cake as you’re given simple, step-by-step building instructions through the official LEGO Super Mario mobile application that you’ll need to download.

Mario, Peach and the rest of the crazy cast of characters are super cute and colourful, and also sport some cool, high-tech features that play a part in a fun lil’ game that you can enjoy to get the full LEGO Super Mario experience.

See, the way I see it, LEGO Super Mario is basically like a physical version of the popular Super Mario Maker video game where players can create their very own levels and courses.

Your goal will be to traverse your heroes across the platforms you’ve created to earn points before the timer runs out.

Each of the main characters (Mario, Luigi and Peach) has built-in sensors that allow the figures to detect where they are and what to do when put in contact with different pieces in the course you’ve created.

The figures also have voices and faces that lit up to emote a variety of colourful expressions as you pick them up and move em’ around the course.

You can shake the figures to make em’ go dizzy, lie em’ down on their backs to make em fall asleep or have em’ jump on different platforms to gain coins, power-up, and knock enemies off the course.

The points you gain will be shown on the LEGO Super Mario mobile app when you connect your figures via Bluetooth to your devices so you can compete with your loved ones for the highest score.

You can also expand the world you create even further by combining different LEGO Mario-themed kits like the Peach’s Castle Expansion Set and others to add on even more fun platforms, challenging obstacles and zany opponents for your heroes to defeat.

To me, the best part about the game is that there are no real rules to it. You’re allowed to let your imagination and characters roam free across the world you’ve built to collect as many points as you can—making it fun for all ages.

For the collectors out there, these ‘toys’ can also make for a charming addition to your display cases.

But, if you’re looking for something with a bit more WAHOO! LEGO has a collection of more intricate Mario-themed model kits which includes this retro LEGO Nintendo Entertainment System, the gigantic Super Mario 64 Question Mark Block, and a larger-than-life figure of The Mighty Bowser that you can piece together, have fun with and show off to your friends.

For more details, visit LEGO’s website or check out their official online store on Lazada and Shopee.