Pinocchio, which is set to release on 8 September features a star-studded cast such as Tom Hanks, Luke Evans, Joseph Gordon-Levitt and many more. 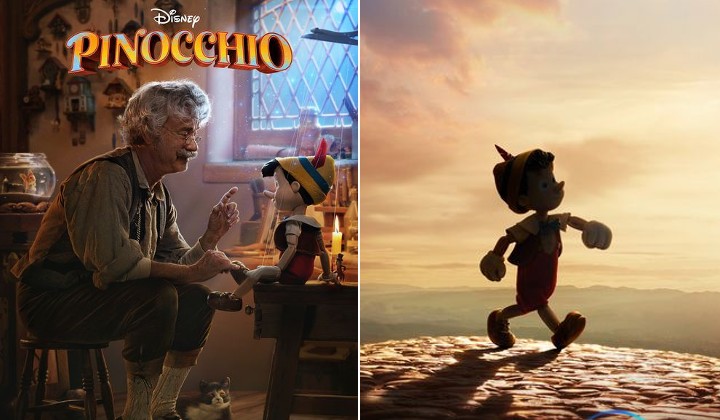 Based on the 1940 animated musical fantasy film with the same title, the live-action remake is now available on Disney+ Hotstar on Disney+ Day.

The idea that was first in inception since 2015 finally made its way to the screens after 8 years of planning. Following the numerous change of screenwriters, directors and producers, the film eventually started filming in March 2021.

Instead of a theatrical release, the film was decided to be released on Disney+ only because of the pandemic back in 2020 and the decision on the screening medium hasn’t changed since.

Nevertheless, the wait for the new Pinocchio was kinda worth it. I know I enjoyed it.

If you don’t know the story (how is that possible?)

Pinocchio tells a story of a wooden marionette doll that came to life and the struggles that he has to face to become a real in-the-flesh little boy.

In a little town in Italy, Pinocchio sets on an adventure with his wise cricket friend as his conscience and went through a lot of trials and temptations – his journey to school, to become famous, to Pleasure Island and into the deep sea (no wonder the film is almost two hours, he went on plenty of adventures!).

This film is also heavily focused on the love that a father (Gepetto, the woodcarver) has for his son and the depths that he would go through just to find his missing boy (this part is a tear-jerker).

Even though the 1940’s film was way different from the original 1883 story (Pinocchio killed Jiminy the cricket, was burned alive and almost hung to death), Disney always had a knack to turn horror classic tales into happily-ever-after million-dollar legends.

This time, there are not many differences between the original film and the remake but the differences actually quite complement the story with new characters, background stories and songs.

The original animated film is a vast departure from the source material.

We use the 1940 Disney version as a template and an outline for our story.

We just modernize the storytelling because there was a different sort of pacing in movies 60 years ago than there is now.

But we basically kept the spirit and the tone and the theme of the first movie.

The classic characters are brought to life by talented and well-acclaimed actors such as Tom Hanks (Forrest Gump, Cast Away) as Gepetto, Luke Evans (Dracula, Beauty & the Beast) as The Coachman, Cynthia Erivo (Harriet) as the Blue Fairy, Joseph Gordon-Levitt (500 Days of Summer, Premium Rush) as Jiminy Cricket, Keegan-Michael Key (Key & Peele, Keanu) as Honest John as well as Benjamin Evan Ainsworth as Pinocchio.

There are a few additional characters as well in the film such as the seagull and the puppeteer. You’ll also be greeted with the cute and funny theatrics of Figaro (the cat) and Cleo (the goldfish that somehow survived being thrown in the ocean in its fishbowl 🤔).

How is it different?

This 2022 film makes me wanna go hug my ol man. Tom Hanks played the father role very well, as he cared and worried a lot about his wooden son getting lost all by himself. He even set sail to the never-ending sea (with his cat and goldfish too) in futile hopes to find Pinocchio.

The main differences that I noticed in the show are the sad baggage that Gepetto carried in the opening scene (it made the movie a bit more meaningful), how Jiminy tried his best to help the boy without the fairy, the act of being kind to strangers, and the ending. Well, let’s not get into the details too much or else this will be a spoiler article.

More than just a kid’s show

This movie is suitable for children and adults of all ages. Anyone can watch this without rewatching or even knowing the plot from the 1940’s film. The story writes itself. But if you’re into the classics, why not catch the original film too just to make a few comparisons?

If you’re a hardcore Disney fairytale fan, Pinocchio is a must-watch! You’ll probably sing along to the classic ‘Wish Upon A Star’ song.

READ MORE: ‘Cars’ Franchise Has A Mini-Series Coming To Disney+ Hotstar This 8 September!

READ MORE: Can’t Watch Thor 4 In Theatres? You Might Get To Watch It On Disney+ Hotstar

‘Cars’ Franchise Has A Mini-Series Coming To Disney+ Hotstar This 8 September!