‘Cars On The Road’ is a Pixar Animation Studio series where Lightning McQueen and his best friend Mater get on the road to Mater sister’s wedding. 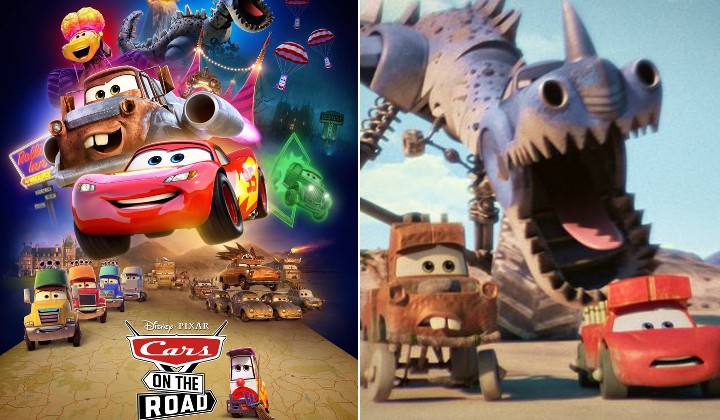 Cars, the animated film produced by Pixar Animation Studios and released by Disney is now back in a series on Disney+ starting this 8 September on Disney+ Day.

Similar to Baymax and I Am Groot, Cars On The Road will be in the form of a mini-series or shorts around 8 minutes time per episode.

READ MORE: I Am Groot – The Most Adorable Character In The MCU Takes Center Stage In New Series [Review]

Like Baymax, it is also directed by several directors, so every episode has a unique spin to it by different directors – Steve Purcell, Bobby Podesta and Brian Fee.

READ MORE: Baymax Is Back With A New Mini-Series Launching 29 June!

We didn’t even know Mater had a sister and now she’s getting married. Aren’t you wondering if she’s a truck, an aeroplane, a sedan or a minivan? Anything can happen in Disney & Pixar animation, right?

Through nine episodes – each around 8 minutes – the pair traverses the nation and stumbled upon comical and unusual situations.

The whole series actually focuses on Mater and how he is actually reluctant to go see his big sister. McQueen offered to accompany him to the wedding but did not expect that Mater wanted to go on the actual long winding road for days instead of just getting on a flight or via his transporter truck, Mack.

From circus clowns to haunted motels, the pair went through some fun as well as rough patches together through every stop and made new friends along the way.

It took them 15 months to make the series come to life but the initial idea behind it started around 3 or 4 years ago, explained series producer Marc Sondheimer.

When asked how he came up with the story in a global virtual press conference, Steve Purcell, the writer and co-director of this series said,

“I always loved road trips when I was a kid. When I was 8 years old, my family travelled from Ohio to San Francisco and that trip across the country stuck with me. Every day was like a new adventure.”

Steve Purcell, Writer & Co-Director of Cars On The Road in a global press conference

Larry The Cable Guy – the voice behind Mater – shares his thought on why people love Mater.

“Mater just loves people and life. He just wants to have a good time and wants to help people. That’s what he lives to do.

“He’s not the smartest cookie in the cookie jar, but he’ll try.  He’s a lovable guy and everybody wants to be by him because he’s fun and he’s just a good person, a good car.

Cars On The Road is definitely worth watching if you love their past movies or if you just wanna watch something light and funny anytime. You can watch any episode you like and they would still make sense as each episode focuses on different adventures.

Catch Cars On The Road this Disney+ Day this 8 September on Disney+ Hotstar. Watch out for other movies and series coming out on the streaming platform like Pinocchio, Thor: Love And Thunder, Star Wars’ Obi-Wan Kenobi and many more.