From singers to freedom fighters, Google Malaysia has honored a lot of Malaysian public figures through their Google Doodle. 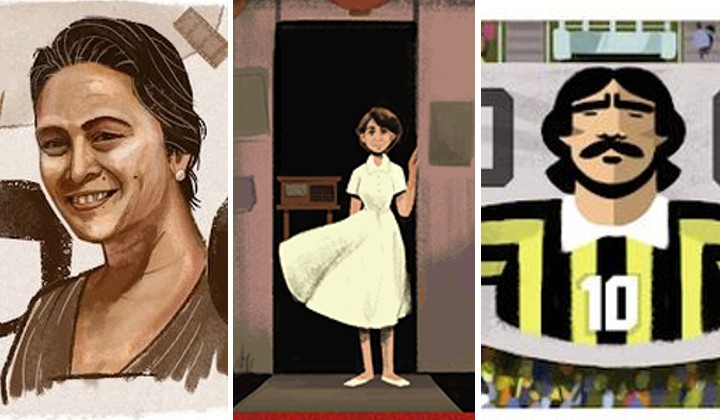 Sometimes you see a special doodle above your Google search bar honouring influential and inspiring people, but did you know we have plenty of Malaysians who have been honoured as a Google Doodle too?

Thanks to Google Malaysia, we have collected some of the Malaysian figures that were on Google Doodle over the years.

Check out their contributions to our nation and their doodle portrait here:

Yasmin Ahmad was an award-winning Malaysian film director, writer and scriptwriter. Known for depicting Malaysia’s colours and telling cross-cultural stories, she was unafraid of tackling sensitive and heavily criticized subjects. She’s best known for her award-winning films like Sepet (a story of first love between a Chinese boy and a Malay girl.), Gubra, Mukhsin, Talentime and many more.

She’s also known for creating touching TV commercials on Merdeka & Raya for Petronas. She, unfortunately, passed away at age 51 after suffering from a stroke and undergoing surgery for a cerebral haemorrhage.

Honouring her, the Google doodle features a water-coloured picture of Yasmin, along with the Google logo stylised in the ‘Sepet’ movie typeface on her 56th birthday on 7 January 2014.

Mokhtar Dahari was a Malaysian footballer from Setapak, Kuala Lumpur. He was also nick-named Supermokh, thanks to his playing skills and strength. He was the nation’s best goalscorer and inspired the country in the 70s and 80s.

In 2021, FIFA acknowledged him as the third top scorer of all time at an international level, with a total of 89 goals, (behind Ali Daei and Cristiano Ronaldo). He passed away at the age of 37 after suffering from a motor neurone disease.

Google honoured his 61st birthday on 13 November 2014 with a doodle of him in our national kit on a banner hanging from a stadium.

Sybil Kathigasu was a Malayan Eurasian freedom fighter and nurse that supported the resistance forces during the Japanese occupation of Malaya along with her husband, who was a doctor.

Both of them secretly provided medicinal services and refuge to the guerrillas of the Malayan People’s Anti-Japanese Army (MPAJA) during the war in 1942 and was even prisoned (in 1943) as well as brutally tortured for information (she refused to give them information nevertheless). She died in 1948 due to the injuries of being tortured and was the only Malayan woman to ever be awarded a British Crown’s George Medal for bravery.

They heated iron bars on a charcoal brazier and applied them to my legs and back.

They ran a stick between the second and third fingers of both my hands, squeezing my fingers together and holding them firmly in the air while two men hung from the ends of the cane, making a see-saw of my hands and tearing the flesh between my fingers.

They would run needles into my fingertips below the nail, while my hands were held firmly, flat on the table.

Sybil, on her unfinished autobiography, No Dram of Mercy

The google doodle (3rd September 2016, commemorating her 117th birthday) of her features Sybil in her nurse uniform standing in the very house her husband and she had provided the secret help in Papan, Perak.

P Ramlee needs no further introduction as he is a prominent icon of Malay entertainment. He was a prolific actor, director, writer, and musician who contributed to more than 60 films and around 250 songs. His greatest works include Ali Baba Bujang Lapok, Penarek Becha, Madu Tiga, Antara Dua Darjat and Hang Tuah.

Even after his death in 1973 (he passed away from a heart attack at the age of 44), Malaysians have kept his legacy alive, honouring him with posthumous awards and naming halls, museums, and other buildings after him.

Google celebrated his 88th birthday on 22 March 2017 with a doodle of him in his diverse artistry background, sporting a thin moustache with a checkered suit, and his head tilted slightly to the side.

Sudirman Haji Arshad is a Malaysian singer, songwriter, writer, author, visual artist and actor. Before he became one of the most popular performers in Asia, he was a journalist and attorney. He is remembered for his piercing tenor voice and some of his best hits were Tanggal 31 Ogos and Balik Kampung.

In 1986, he performed on a crane for a crowd of over 100,000 people (including Malay, Chinese and Indian fans) on Kuala Lumpur’s Chow Kit Road. The legendary singer died from pneumonia at the age of 37 in 1992.

On 25 May 2019, Sudirman Arshad’s 65th birthday was celebrated by Google with a doodle of him. The doodle featured him singing in the corner. Their logo is spelt in neon lights with a symbol of Sudirman’s signature in yellow neon.

These are just half of the celebrated Malaysians Google has honoured. Stay tuned for our talented Malaysian researchers and artists in part 2!