After two years of virtual Hari Sarong, the physical Keretapi Sarong is back this year on Malaysia Day. 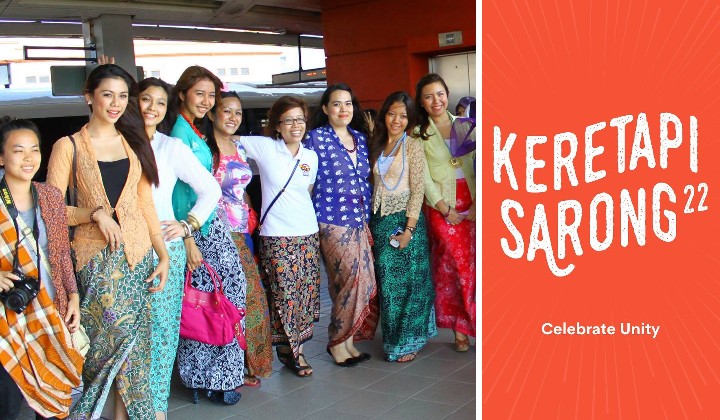 Calling all Malaysians! Our patriotic spirit is just burning during these two months, right?

Do you have any plans for Malaysia Day yet? If you don’t, why not join the Keretapi Sarong Event?

For this year’s Keretapi Sarong, there are a few additional details including new stations, new partners, a new theme and a new group dedicated specifically to anyone who wanna join the fun.

Other than the five usual stations, they added three more additional stations which are the KLIA ERL station, Putrajaya ERL station and KL Sentral KTM station.

These three new stations only act as boarding points while the five main stations (as written below) have several activities lined up like in previous years.

The activities will start at 8.30 am at the five main stations. The secret location will be revealed on that morning at the stations, so don’t be late! You might miss the train!

For this year’s fashion theme, they’re going all out and back to the oldies. It’s going to be an awesome fashion event, that’s for sure!

You can dress up in costumes from the 60s, 70s and 80s. Go borrow your parents’ or grandparents’ clothes! We’re sure they were fashionistas back in their golden ages.

And don’t forget to still bring your kain sarong. This is a Keretapi Sarong event, after all.

Don’t have anyone to teman you? No worries, join the Geng Takda Geng & you’ll fit right in.

Who said you need your friends to have fun? You can still meet new people and have fun! It’s a uniting event, after all.

If you wanna join this group, do come early to the respective stations for some ice-breaking sessions and just find the ‘Geng Takda Geng’ banner to identify them.

What is Keretapi Sarong?

Keretapi Sarong is an event where people from all walks of life gather to celebrate Hari Malaysia in their sarong or traditional attire at a ‘secret location’. It’s sort of like a flash mob, but the public is strongly encouraged to join in.

Originally organised by Random Alphabet, it started in 2012 and stopped around 2015 or 2016. It was later passed on to Locco, a community group aiming to advocate and showcase the best of Malaysia, which brought the lively event back in 2017, and it was better than ever.

Here is an example of how they sang the popular Dikir Barat song, ‘Ewa Ewa Bule’ (KeretapiSarong19) at one of the designated stations.

Every year on the 16th of September on Malaysia Day, locals and also tourists can dress up in their sarong (long tube-like fabric usually draped around the waist) or traditional attire and get on public trains in the Klang Valley, headed for a specific place where they celebrate the day, dressed to the nines.

The aim of this extravagant event is to unify Malaysians no matter their background, encourage the use of public transportation and uphold Sarong as a symbol of integration.

Here, the other troupe sang ‘Rasa Sayang Sayange’ in another train station (KeretapiSarong19).

What should you bring?

Everyone is encouraged to join this year’s Keretapi Sarong 2022. But with a large crowd event, you should be prepared with some materials such as these:

If you’re keen to know more, watch the Keretapi Sarong 2019 highlights in the video below.

Then, they walked together to Dataran Merdeka (2019’s secret location) where various activities and performances awaited them.

For more info, visit Locco’s website where they explain more about the event and how their past events went like. They even did a whole documentary about it!

READ MORE: Did You Know You’re Wearing Your Relationship Status On Your Kain Batik?

READ MORE: A Foreigner Found Our Historical Malay Textile Art So Fascinating That He Started His Own Collection