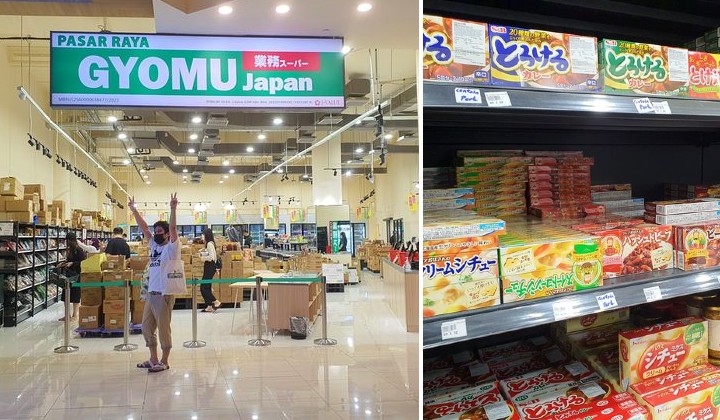 Gyomu Super is a new Japanese supermarket that recently opened up in Pinnacle PJ, which is in the same building as Sheraton Hotel PJ.

The Gyomu Super chain of supermarkets sell cheap Japanese food at cheaper bulk prices, but is it worth visiting when there are already large Japanese import stores such as Don Don Donki?

We visited the store to find out.

The location of Gyomu Super is within the Pinnacle PJ building. It is not particularly large, but the store is clean and relatively tidy.

However, instead of having items displayed on aisles like a traditional supermarket, most are arranged within their shipped cardboard boxes and stacked in small islands around the store, which makes it quite easy to see the whole store at a glance.

Probably the best thing about Gyomu Super is how Muslim-friendly it is. At the entrance, there is a small sign that helps to indicate halal-friendly items sold at the store.

Every item is meticulously tagged with stickers so Muslim shoppers can shop with a peace of mind, and there’s even a separate pork section for non-Muslim shoppers.

There are plenty of Japanese food items in many varieties, and even some that are difficult to find elsewhere, such as natto, which is pungent slimy fermented soybean. (Which tastes better than it sounds.)

Here, you can pick up frozen bulk items commonly used in Japanese restaurants such as frozen tempura shrimp and pickled vegetables. (Now you know where they get their stock!)

Price-wise, most things are indeed slightly cheaper than other import stores, although certain items are similar in price. Most items are sold in big bulk bags, so be sure you can finish using up the ingredients as you buy!

However, there are plenty of affordable bulk options for items you may not be able to get easily elsewhere, such as frozen processed seafood items, bonito soup stock, or even tonkatsu ramen base.

Gyomu Super is a grocery store, first and foremost. While they do have some selections of instant noodles and snacks, the majority of goods here are ingredients.

That means if you regularly cook Japanese cuisine at home, you’re in luck! This is the right place for you to go. Additionally, Gyomu Super’s considerate tagging of halal, pork-free, and non-halal items make shopping particularly easy for Muslim homecooks.

There’s a fantastic selection of Japanese staples with a wide variety of brands to choose from (there’s like 20 brands of Japanese mayo alone), but there’s no ready-to-eat food such as bento or onigiri. Although, they do have a small selection of fresh vegetables. We understand that more fresh items such as vegetables and meat will be introduced at a later date.

However, if you’re walking in expecting something like FamilyMart or Don Don Donki, where you can pick up simple ingredients and also a quick bite, this isn’t your space.

Additionally, Gyomu Super is actually quite small. It is the only shop in the Pinnacle PJ building, which houses offices and also Sheraton Hotel PJ. There are no other shops, which means that you should only come if you really want to visit Gyomu Super. (Or if you work within or nearby the building.)

Parking is rather difficult in the tight and cramped parking lots below, which starts at RM4 for the first hour. Although the building is right next to the large Decathlon super store, it isn’t actually super convenient to walk over (though you could drop by and make full use of your parking).

Frankly, it is probably much easier to visit Gyomu Super via LRT instead, as the pedestrian bridge connects Asia Jaya LRT station almost directly to the Pinnacle PJ, and you will save on parking and skip the traffic.