From 5,000 pieces of the Malay textiles he collected, John Ang uses 700 of those for his Splendor of the Malay World Exhibition. 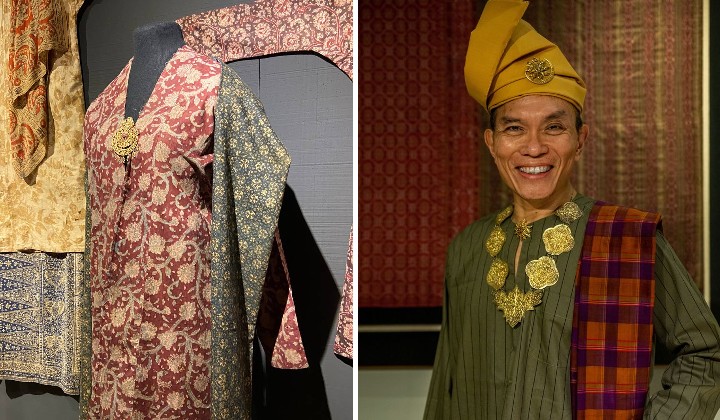 A patron of Asian arts and an avid art collector, John Ang has been collecting Malay textiles since 2014. Now showcasing his newest collection of Malay Textiles in an exhibition, we were intrigued to know how the American citizen became so involved with our nation’s textiles, some widely cherished and some even forgotten. In an exclusive interview, we got to hear interesting stories and artistic values of the textiles that he collected along his journey.

It all started with a catastrophe

John Ang has been collecting textiles for 53 years before he truly embarked on Malay textiles. He vividly remembers he was just returning back to Taiwan from Bali and brought home a gorgeous textile he liked. But, he didn’t know what the particular textile was. It doesn’t look Indonesian to him but he didn’t think it was Malaysian. One thing’s for sure, it was beautiful.

However, there was an oil stain on it and when he cleaned it up himself by soaking it in gentle detergent for a night, somehow it got worse. Next thing he knew, the cloth was in shreds. This buggered him as he didn’t even know what kind of cloth it was. He only got a picture of it for memory. It was all a catastrophe.

Then, after a while, he was coincidentally in KL and saw in a local newspaper the same textile, but more breathtaking, than the one he had destroyed before. They were showing it to Tun Dr Mahathir at the Islamic Arts Museum in Kuala Lumpur. If they’re showing it to the famous politician, it must’ve been important.

After asking his Malay friends about it, he found out that it was called a Tenggarung, a kind of Limar Bersongket textile. Limar is a type of textile where the patterns are created by first resist dyeing a bunch of tightly bound threads in different areas before weaving them to form a required pattern.

Songket on the other hand is where a supplementary weft (either gold or coloured thread) is decoratively sewn above the base fabric. Limar Bersongket is basically the Limar fabric, with additional gold or coloured threads sewn above it. These type of textiles can’t be soaked for too long or brushed. It needs to be properly cleaned the correct way.

He asked his friends to find a piece of Limar Bersongket for him. However, when they did, he found the price to be rather unreasonable. He told them to give him a day to think about it. When he researched and found out the true extravagant value of the textile, the cloth was long gone, snatched by another buyer.

He was frustrated again. He even flew from Taiwan to Terengganu to see it. All that trouble for one exuberant cloth, got him hooked on finding the beautifully intricate textile even more. And that was how he started to dig more into the Malay textile world.

Now, he has more than 13 Tengkarung in his collection but he still remembered the first few ones that he fell in love with, but wasn’t his. If you love something, let it go, right?

From catastrophe to mastery

John Ang is a USA-born citizen with Singaporean parents. After receiving his degree and masters in Asian Art History at the University of Michigan, he started off by being an art journalist in Japan and then moved to Taipei to open a gallery for Asian antiques, furniture, textiles, ceramics and jewellery.

After almost 30 years as the director of the gallery, he moved to Malaysia in 2018 to devote his time to collecting and researching Malay textiles. Now, he has over 5,000 pieces of Malay textile and 700 of them are now being showcased in his Splendour Of Malay World Textiles exhibition in Menara Ken, TTDI, until the 30th October 2022.

From Songket and Limar to Renda and Anyaman, he has divided the 700 pieces into 12 categories to make it easier for the public to identify and study them. He also put on some international pieces he’s collected near the Malay ones so visitors can make comparisons and see how the art travelled from one origin and adapted to another.

What’s so different about this collection from others out there?

It is the first of its time, due to it being a trans-regional collection.

“Most of the Malay textile collections are regional, whereas my collection is trans-regional. I have textiles from the Philippines, Cambodia, Vietnam, Persia and even England, that are in fact, Malay. This is because of the Malay world market that was so strong, once upon a time.

“You see, the Malay world was actually the sea (maritime trade), and the port cities were the peripheries. They were connected through the sea and because of that, they became homogeneous. Malay cultures are everywhere, basically.

“For example, every Malay country in Dunia Melayu has laksa. But the laksa differs according to the regions due to their regional weather, herbs and taste. That’s the Malay world, it’s diverse yet homogeneous at the same time.

“But now we are split up so many people don’t focus on the concept of the Malay world. Some will claim that that country is considered Malay and what’s not, so it’s controversial. The periphery of the Malay world is getting blurred.

“So I clarify through the similarities of textiles. You can’t just focus on one region. For example, I saw this particular symbol in a Malaysian songket and asked them what it was. They didn’t really know. But when I saw the same symbol in Banjarmasin in Indonesia, they can tell me the meaning and the story behind it. This is because they are so remote, that they successfully managed to keep the meaning.

“In Malaysia, the development is so fast, a lot of things are forgotten and not documented. So when you go trans-regional, you can rebuild your culture and bring back what is yours. And that’s why my collection is different. It tells stories that sometimes locals didn’t even know about, but is actually related to them.”

Some interesting textiles in his collection

No doubt, John likes all of his collections but there are some particular pieces that he adores because of the stories behind them.

One of his precious pieces is the limar berayat. It’s very precious because it has inscriptions from the Quran and he’s proud that he’s able to collect a few. He even has a Sanskrit inscribed patola (a type of Indian cloth similar to Limar) put next to the limar berayat to show similarities between the Malay and Indian textiles.

“Another precious piece of mine is the Pelangi (Tie-dye) Sapu Tangan (handkerchief). It didn’t cost me that much but I love it because it’s rare. I know that I have the only one left in good condition as those types of things are usually worn, torn and thrown away back in the days.”

In addition, the oldest piece of textile he has in the collection is the Indian Patola from the 17th century. It looks like it’s torn because of its age but actually, the cloth was purposely cut to be used as medicine. Because they are so tough to make and expensive, some believe that they’re imbued with magical powers that could heal people.

There’s also a piece of Pelangi (tie-dye) called lawon where two or three colours are used in a cloth and a blank diamond or rectangular shape is created at the centre. That lawon is usually donned on widows as a shawl, signifying that they’re ready to be remarried.

Hope for the future

John hopes for his whole collection to find a home here in Malaysia, someday. He dreams of finally passing the baton to a foundation here so they can properly and carefully protect the Malay textile collection for the future generation to see. Things like these need to be cherished and protected.

Additionally, after finishing this exhibition, he’ll then continue a specific exhibition from the 12 categories starting with Songket, this December till January.

Come and see the exhibition. Claim back what the textile share about your culture and be aware of it so that you can be proud of.

Come and learn about your real identity because Malay textiles reveal all aspects about Malay people.

The Splendours of Malay World Textiles

You can also ask for a free tour from John Ang’s students there if you wanna know more about some particular pieces.

Get your tickets here.

READ MORE: Did You Know You’re Wearing Your Relationship Status On Your Kain Batik?