Broken blood vessels in the eye could be caused by the intense pressure when you’re bungee jumping. 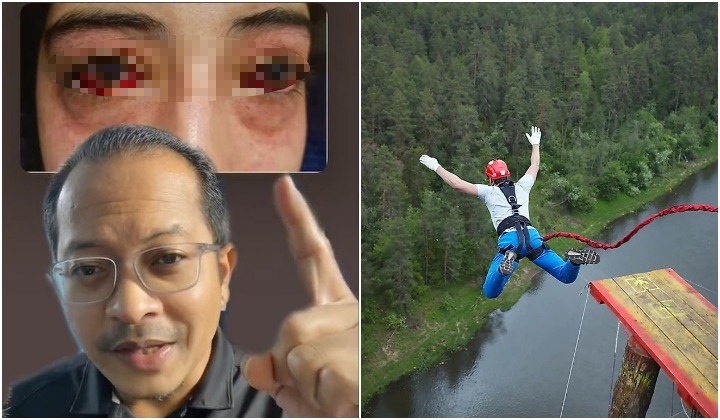 For those adrenaline junkies, you should think twice before deciding to bungee jump. Especially those with eyesight problems. The higher your eyesight power, the higher your risk of having a broken blood vessel in the eyes, or a condition called subconjunctival haemorrhage.

Recently, an optometrist who likes to share eye care tips on his TikTok @shahrizalredwan, has made a few videos about the risks of bungee jumping our eyes. In one particular video, he shared an incident where a 24-year-old woman had her eyes injured after doing a bungee jumping activity.

In the video, Shahrizal showed the condition of the woman’s eyes which turned frighteningly red due to a broken blood vessel in the eyes. He said after her bungee jump, her eyes turned red and blurry. She also felt dizzy, unbalanced, pain in the back of her neck and a tight chest.

Luckily, he said all the symptoms went away after a month but one thing remained. Her left eye was still blurry. Turns out that her left eye had it way worse and there’s still bleeding at the back of the eye.

It’s because of the intense pressure

In a separate video, he talked about a study where 84.2% of individuals that did bungee jumping suffer from these types of bloody eyes. Those bloody eyes are called subconjunctival haemorrhages. They happen when the pressure of the fall is too high and the delicate blood vessels in your eyes burst.

While they’re not dangerous to some, as an optometrist, Shahrizal really doesn’t recommend those with serious eyesight problems to try this.

Even though after some time, the eyes will return back to normal, for those with relatively high myopia (rabun), you might risk another condition where a layer of your eye might tear and your vision can become blurry.

But if you really want to try bungee jumping (hey there’s no stopping the adrenaline!), Shahrizal advises not to hold your breath while you’re at the bottom. That moment where the cord stretches the most, do not forget to breathe!

Turns out that not everyone is aware of the risks

In the comment section, a majority of social media users had not known about the actual risks of the exhilarating activity.

After watching his video, a lot of people decided to cancel their intentions of scratching this off their bucket list.

Some even asked, what if we wore goggles? Would that solve the problem?

NOPE, sorry! Although goggles are excellent for protecting your eyes against external factors like the cord, unfortunately, they don’t protect you from intense pressure.

What about closing your eyes tightly when you drop? Sorry, not gonna work, you can still get bloody eyes.

Well, now you’re thinking twice huh? Now that you know the risks, do you still think it’s worth it?

READ MORE: 5 Outdoor Malaysian Adventures You HAVE To Try Out!