Currently doing their rehearsals with 17 of our talented Malaysian kids, the show will premiere at Istana Budaya for 2 weeks. 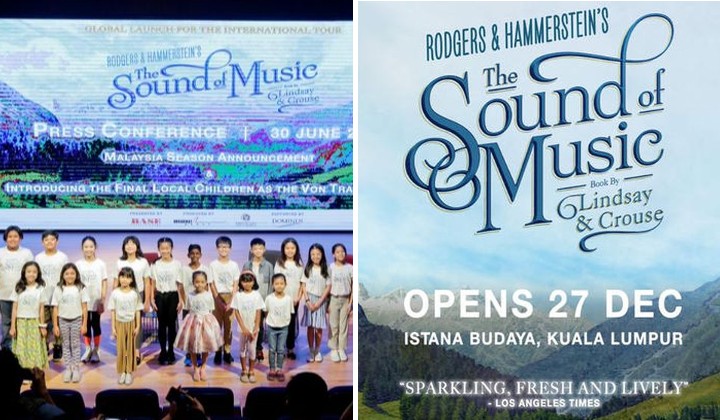 Are you a fan of musical theatre? If you do, then this is just for you.

The classic musical theatre ‘The Sound Of Music’ is here in Malaysia and will be premiering this 27 December in Istana Budaya with an all-new international production.

International production but with a few Malaysian casts

Produced by Broadway International Group, supported by Dominus Arts Venue and presented by Base Entertainment Asia, this new Broadway production tours globally and has now arrived in Southeast Asia for the Malaysian season.

Besides their own original performers, they also casted local talents for the roles of the Von Trapp children. So we’ll be seeing our talented kids performing alongside Broadway actors!

The children are aged 6 to 14, picked among a pool of 400 brilliant applicants that went for the audition on 28 and 29 June at Wangsa Maju previously.

17 kids were chosen to play the roles of 6 Von Trapp children, alternately through the 2-week production. They all have high-level skills in acting, singing (including parts with harmonies) and also dancing.

The uplifting story tells the life of Maria, a jovial and loving governess who changed the lives of a widowed Naval Captain von Trapp and his seven children by re-introducing them to music. She fell in love with the family and went through great challenges across the Austrian mountains as tensions rose prior to the World War II outbreak.

The Sound Of Music is a production that was based on the true story of Maria von Trapp’s life. She was in the ‘Von Trapp Family Singers’ which was one of the world’s best-known concert groups in the era immediately preceding World War II. She wrote a book about her life called ‘The Story of the Trapp Family Singers’ which was published on 1949 and became a bestseller.

The story then became a highly acclaimed theatre production that appeared on Broadway in 1959. It won five Tony Awards including Best Musical, a Grammy Award for Best Show Album and was Rodgers and Hammerstein’s biggest success.

The famous theatre was then made into a film in 1965 starring Julie Andrews and Christopher Plummer. The film won five Oscars, including Best Picture, and remains one of the most popular movies of all time.

If you’re not familiar with ‘The Sound of Music’, here, take a look at the classic trailer of the movie. Maybe there are a few songs in there you’ll be familiar with.

The lowest is priced at RM320 (Category D) while the highest is at RM630 (Premium). It varies according to the dates also (weekends are pricier than weekdays).

However, do bear in mind that these prices don’t include the processing fee yet. It’ll be charged just a bit more.

Check out the available tickets now here for booking.

We can’t wait to see these gifted performers live at the end of the year. Go book your tickets now!

After Award Success, This Malaysian Play About Religion In Society Will Finally Screen Globally Online