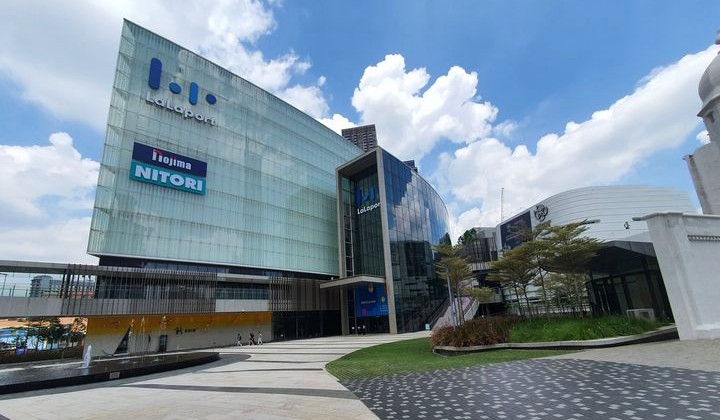 Mitsui Lalaport Mall is a chain of shopping malls from Japan that just opened its first Malaysian mall right in the city earlier this year. The mall features notable Japanese stores such as NITORI, Nojima, and Don Don Donki.

The mall is built over the old Pudu Jail on Jalan Hang Tuah. However, the prison has not actually been in use since 1996, and the building was demolished in stages until all that was left is the landmark main gate and a section of the exterior wall. In fact, the main gate has actually been incorporated within the design of Lalaport!

Lalaport officially opened in January 2022 to much fanfare and thousands of pictures on their iconic staircase. But six months later, has the mall been able to make a stand for itself?

I visited the mall on both a weekday and weekend afternoon. Both days, the mall was relatively quiet with little crowds.

The iconic staircase was empty, which made it easy to set up a camera and snap away for pretty cool shots. The stairs are outfitted with flashing lights and music, but there’s not much else here.

The mall layout itself is rather confusing. It’s shaped like an oval with intersecting corridors, but it’s easy to get lost if you’re looking for a specific store.

Still, if you’re not in a hurry, the aesthetics and architecture of the mall are great. There are plenty of nooks and crannies to poke around in and beautifully done up shops that make for gorgeous backdrops. It’s pretty nice to simply wander around and admire the light displays and gentle rounded designs of the mall.

Although the mall boasts around 400 shoplots, a majority of them stand empty even in July, six months after the official opening. Even supposed anchor stores like Don Don Donki were still “coming soon”, and you can faintly hear the sound of construction as you walk through the mall.

Lalaport is also supposed to have a nice rooftop garden, but it is currently closed in preparation for a pretty light exhibit, so I didn’t have a chance to check it out.

At the South Entrance of the mall is a large open-air space (Wow Plaza) that leads to Gourmet Street. This street is quite popular with a nice mix of eateries and coffee shops, such as crowd-favourite Japanese chain Hoshino Coffee and artisanal creamery Matcha Eight.

Gourmet Street allows for al fresco dining, so it’s great for those who like to people watch. On weekends, there are also buskers at the Wow Plaza so you will also get to enjoy live music.

While it’s understandable that things were delayed or slowed down during the pandemic, and that the mall’s opening was probably rushed, I was very surprised to see that many stores – anchor or otherwise – were not yet ready even six months after the official opening.

Despite having operated for half a year by now, there is little here to convince shoppers that it’s a vibrant and happening shopping mall. I may have disregarded the unreadiness during the official launch, but at this time I find Lalaport to be rather disappointing.

However, if you’re the kind of shopper who has an itinerary and only visits the stores you like without browsing the rest, you might like the place due to its lack of crowds. Shopping here at the available stores is an unhurried and relaxing affair, without much stress or bustling about. The interior is also strongly influenced by Japanese design and clean lines.

There’s also a relatively decent dining selection in both the Gourmet Street and the Lower Ground floor, so you will have nice options for food. Choose from Japanese to local cuisine to fast food to yummy desserts.

Still, like many other recent malls and projects, Lalaport suffers from launching officially before they were ready. I truly believe that had the mall waited perhaps another year to complete its construction and renovation work for the mall and its tenants alike, and only opened its doors officially when everything else was ready, Lalaport could easily reach its full potential.

Hopefully, with a bit more time, Lalaport can bloom into a happening point of interest in our city. All it really needs right now is a bit of a polish.

If you would like to visit the mall for yourself, parking is free until 31 August. Alternatively, the mall also has a direct connection to Hang Tuah Monorail and LRT station if you don’t want to fight through KL traffic.