In the wise words of Enzo, “That which you manifest is before you.” 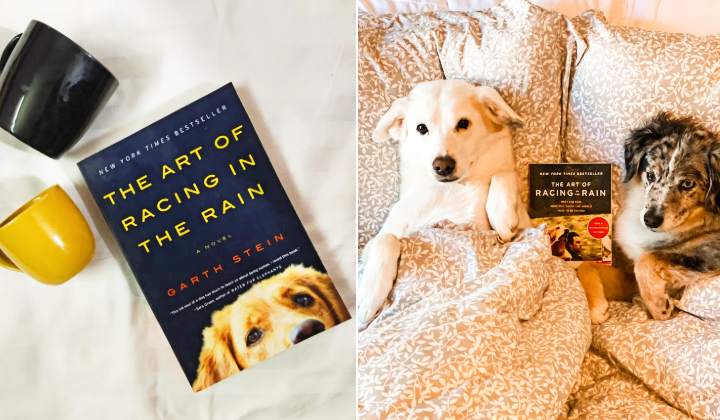 To say that I raced through Garth Stein’s The Art of Racing in the Rain would undoubtedly be a terrible pun, but it would also be true.

I first heard about the book when a close friend recommended it to me, and I trust all of her suggestions so I jumped on it after she sent me the e-book. The only thing she told me about the book before I read it was that the book is narrated by a dog.

“This is gonna make me cry right?” I asked her, cause I remember bawling my eyes out after I watched Marley & Me.

I can’t deal with stories where a dog dies or gets hurt physically or emotionally.

The Art of Racing in the Rain is narrated from the perspective of Enzo, a pet dog owned by promising racing car driver Denny, his wife, and their young daughter.

Enzo’s loveable and devoted personality makes for a unique telling of what turned out to be the best book I’ve read by a long mile this year, despite the fact that I wasn’t really sure how the tale would work – being narrated by a dog as it were.

We discover early on in the book that Enzo has a primary goal: to spend the rest of his days as a dog so that he can return as a human, and stop using gestures to communicate. Enzo was adopted by Denny from a farmer who claimed that his female Labrador had unintentionally mated with a Poodle.

The intelligent and courageous Enzo insists that his father was a Terrier because, as he says, “Terriers are problem-solvers.” This lineage distinction is evident throughout the entire novel.

But he also serves another duty in this life, which is to guard and care for his master and his family when they go through numerous challenges. And although he may only be able to make gestures for now, he provides his family with more support than they may think, especially in the wake of Denny’s wife’s illness.

What follows is a gripping tale with a dramatic turn that alters the course of Denny’s life as he knows it. And while Enzo’s master faces challenging times in the future, his loyal friend will remain devoted and unwavering throughout – supporting the widely held belief that dogs are indeed a man’s best friend.

Enzo is dying by the end of the novel, but he is adamant that his time as a dog on earth only means that he will be resurrected as a human in the afterlife – an achievement close to his resilient Terrier heart.

I left the book with a deeper appreciation for race car drivers and the grit required to perfect the “art of racing in the rain,” as well as Garth Stein’s flair for storytelling. The book also put a lot in perspective for me, as we often go through life so riddled with our burdens that we lose focus on the things that really matter.

In the wise words of Enzo, “That which you manifest is before you.”

And “Somewhere, the zebra is dancing.” Read the book to know what that’s about.

I also hugged my dog a little tighter that night. And I started to wonder what were the stories she told herself about us.