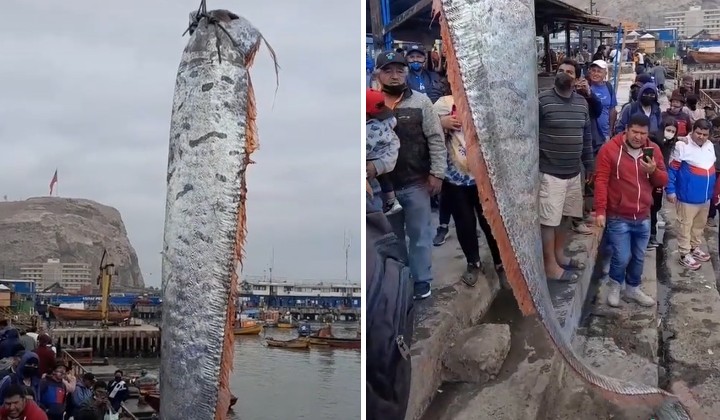 A few days ago, locals in Chile had the scare of their lives when they found a 16-feet (around 5 meters) long fish being pulled out from the water by fishermen in the area.

The dead fish was hoisted out of the waters using a crane in the Arica harbour and a video of the giant fish called the oarfish went viral on TikTok with around 19M views.

Oarfish is a type of large and flat, elongated fish that kinda looks like an eel (but they’re not). They belong to the Regalecidae family and are known to be the world’s longest bony fish (can span around 56 feet [17 meters] long).

The fish is rarely seen on the surface because they live deep in the sea ranging from 200 meters to 1,000 meters. Because there’s little current to no current to where they live, they have no muscle mass and can be seen to even swim vertically in the deep sea.

Some say they’re a sign of an incoming earthquake

These fishes are suspected to be the source behind many legends about sea serpents in the deep sea. Remember those stories about sea monsters told by sailors? Yea they could probably be just this guy swimming up to say hello.

Another popular folklore from Japan tells the story of Namazu, a giant catfish hiding beneath the Japanese mainland, causing earthquakes in the human world when he wiggles his tail. This creature of mythology is known to cause misfortune and disasters.

There’s also another similar fish called Ryugu or Tsukai – dubbed as the messenger from the palace of the sea god (their version of Poseidon or Neptune) – who supposedly visit japan’ shores to warn of impending earthquakes and tsunami.

Consequently, a lot of people worry that oarfishes would be a harbinger of doom. Some say that these creatures can detect an upcoming earthquake as they are deep-sea dwellers, not surface sea swimmers. So why would they come up to the surface if not to warn us, right?

In fact, some scientists have even hypothesized that since deep-sea fishes are closer to active faults, they may be more sensitive to chemical changes that happen in the water when earthquakes occur. But it’s just a hypothesis. Not a conclusion.

This is a highly debated topic and these fishes’ correlation with earthquakes might be just a coincidence.

There’s no conclusive research that proves it, so currently, it’s still just a myth

Turns out, there are plenty of other facts that support the notion of why these deep sea creatures ended up on the surface. Some of them include them probably dying, them not being good swimmers, and also the El Niño effect.

According to Dr. Misty Paig-Tran, a Marine Biologist at California State University Fullerton, oarfishes are not strong swimmers. They probably are washed up to the surface because of the changing ocean currents. Once they’re there, they can’t swim back down. After all, most of the oarfish found near the surface are usually sick or dying.

She also added that, if there’s in fact a tsunami coming, a lot more types of deep-sea fish would be washed ashore, not just this handsome fella.

Next, the El Niño can also cause them to wander off their natural sea level. According to a 2018 study, as the water from the deep sea turns cooler and the surface turns warmer, planktons or krills are found more on the surface. Hence, these guys will follow where their seafood platter takes them.

Apart from that, a group of Japanese researchers led by Yoshiaki Orihara, a seismologist from the Tōkai University Institute of Oceanic Research, wanted to test whether their mythology was right. And so they did various analyses in finding the correlation between oarfishes and earthquakes including poring over newspaper reports, aquarium records, and academic papers dating back to 1928.

“One can hardly confirm the association between the two phenomena,” concluded Yoshiaki and his colleagues in a recent paper in the Bulletin of the Seismological Society of America. They found no quantifiable relationship between the two and note that this is sadly just a superstition. If this were to be true then they could potentially set this type of animal to be a warning sign of impending disasters.

Superstition or not, here are some amazing facts about these innocent deep-sea dwellers.

They pose no danger to humans as they don’t even have real teeth! Instead, they have gill rakers, usually used for suspension feeding. They feed on plankton and tiny creatures like small fish and squid.

Additionally, they also auto-amputate their own tails (like lizards do when threatened) to increase their survivability (it’s not easy being a long prey in the deep predator-reigned sea). Their vertebrae just break off right down the centre and snap! The tail is gone.

Another fun fact is that some even say that they taste like gelatinous goo, too (they really are not meant for eating, even dogs and seagulls reject their flesh).

So, if you see an oarfish suddenly, don’t panic just yet. This sea creature is probably just too tired to swim back to its habitat.