The short 6-episode series is set to premiere exclusively on Disney+ Hotstar. 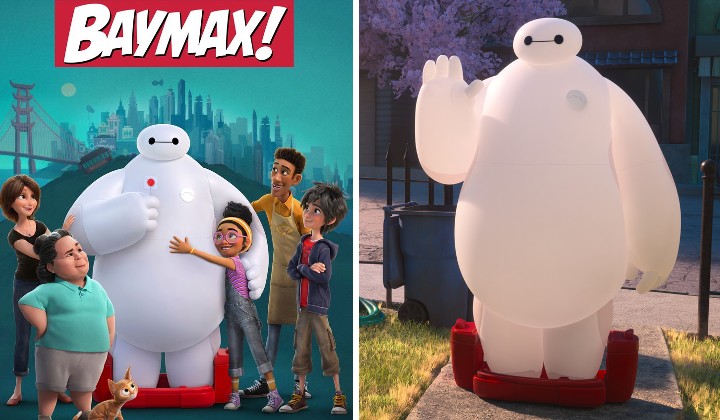 If you have watched Big Hero 6 back in 2014 (and the 3 seasons cartoon series in 2017), you’ll remember our lovable and huggable computer robot, Baymax.

Guess what? We’ll be seeing him again this July in a new mini-series called Baymax!

It’s In A New Format

However, Baymax! is not in a 90-minute movie or 30-minute series episode. It’s in a new format, which is a 7-8 minute series mini-episode.

For your information, the movie was like a 3D computer-animated film while the 2017-2021 series was more of a 2D cartoon show.

This new format is a combination of the two with 3D animation and numerous episodes.

This makes it easy to binge, even if you only have a 10-minute break time!

What Is It About?

It features the story of how Baymax helps others in the familiar town of San Fransokyo. Instead of focusing on the original Big Hero 6 characters, this new series is more of a compilation of laidback heartwarming stories where Baymax tries his best to help the people in town who are a bit reluctant to accept his help.

From our familiar Aunt Cassie to the stray cat on the street, Baymax doesn’t care who or what he treats, as long as they get the healthcare attention that they need. And the story gets even funnier and cuter when the patients try their best to avoid help from the affable, innocent and inflatable white vinyl robot.

This series focuses more on the side character’s life and highlights the importance of appreciating our healthcare workers. Well, you know what they say, not all heroes wear capes.

A Bit More Behind The Scenes

In a virtual global press conference on 27 June 2022, Don Hall (Creator), Scott Adsit (voice of Baymax) as well as the two producers, Roy Conli and Bradford Simonsen, shared their takes on the upcoming short production.

The six-episode series creates a chance for multiple directors (there are four directors in this series) to work together and direct the episodes independently. This also creates an opportunity for storytellers at Disney animation to work with a new format and unleash their creativity besides the usual 90-minute format.

According to the creator of Baymax! who’s also the director for Big Hero 6, Don Hall, it took the team about three years to make the series. Starting from just the development of the idea in 2019 to the production and finally the premiere of the series in 2022.

For the cast, Scott Adsit reprises his role as Baymax, Ryan Potter comes back as Hiro, and Aunt Cass is brought back to action by Maya Rudolph. A few more new characters are voiced by Emily Kuroda, Lilimar, and Jaboukie Young-White.

There were, of course, challenges along the way but the most prominent ones are the technology of the setting as well as of course, the lockdown.

The setting of Big Hero 6 features a very modern fictional city even in 2014. “So to bring the story back after seven years, the technology in it has to be more advanced”, said producer, Roy Conli.

Besides that, because the setting of San Fransokyo is a mash-up between two cities, they even had to send teams to both Tokyo and San Francisco to get the detailing of the cities on point. If you can see clearly in the movie or series, you’ll notice that the street pattern is San Francisco, but the design element is Tokyo.

Additionally, voice actor Scott Adsit even shared that he had fun creatively working in his in-home studio made of pillow forts in his closet.

Baymax shows us through this whole thing that we all have challenges in our lives that we need help with and there’s nothing to be ashamed of that.

It’s only through help that sometimes we get through these things, so I hope it really makes kids look at that and say it’s okay to ask for help.

And hey, don’t miss out on various easter eggs from the film in the short series! It’ll take you back to the nostalgic 2014 film.

The short series will be available to the public on Disney+ Hotstar starting 29 June 2022.

Go and rejoice with your favourite personal healthcare companion!

‘Cars’ Franchise Has A Mini-Series Coming To Disney+ Hotstar This 8 September!